Tony Fernandes has sold his struggling Caterham motor racing team to an unnamed consortium of Swiss and Middle Eastern investors, bringing the chequered flag down on the Malaysian entrepreneur’s costly, failed foray into Formula One.

Cardiff Airport, owned by the Welsh Government, has announced that Jon Horne will stand down from his role as Chief Executive from 1 September.  Horne served n a similar capacity for a previous period at the airport when owned privately and was much involved in the development of London City.

British Airways’ passengers are now able to hold flights for up to 72 hours before deciding to confirm them.  Holding reservations per person on short haul flights costs £5, while those wanting to secure seats on long haul flights pay £10 per person.

Faced with intense competition from the Gulf carriers with flights to the east, Lufthansa is looking at ways of hitting back.

The consumer publication WHICH has published its annual UK airport passenger survey with typical publicity gusto.

BTN cannot argue with the results, the product of over 10,611 responses by members, but they are distorted in that a small, properly organised operation is generally bound to provide a better service than a large one.

WHICH also misses a vital point.

The Sunday Times Business Desk has highlighted some serious problems that British Airway has with punctuality.  According to the newspaper one third of flights to the key destinations of Hong Kong, Johannesburg and Los Angeles failed to depart on time in May and June.  A punctual departure is considered by the airline industry as one that leaves the gate within 15 minutes of its schedule.

With airport security operations now able to request that electronic devices are charged up when passing through, Avis and Budget are making available the purchase of universal chargers at airports and other locations across Europe.

Product upgrades have been announced by Finnair to comprehensively renew the customer experience.

Michael O'Leary, Chief Executive of Ryanair, seems to be blowing hot and cold on the idea of taking over the government-owned loss making Cyprus Airways.  He is now saying that he is interested and is visiting the island and will have talks with officials.  Last month he said that Ryanair was not particularly attracted to acquiring the airline.

First Class passengers on Cathay Pacific between Hong Kong and London from September to December are in for a treat.  The award winning carrier has joined with Mandarin Oriental Hotel Group to create a unique inflight menu featuring contemporary fine-dining with a classical twist.

No Gatwick trains to London Bridge

Perhaps not as well-known as he should be, Sir Roger Bone, President of Boeing UK and Ireland, will retire at the end of September with Sir Michael Arthur assuming the post from 1 October.

Dubrovnik and the Dalmatian Coast may be familiar to British holidaymakers.  Even in the days of Tito and Yugoslavia the charter flights found their way to the pretty Adriatic cities steeped in history.####

Today Dubrovnik is part of Croatia, created after the breakup of the communist regime.  The nasty wars of the Slav states in the early 1990s are now largely history with most of the damage repaired and prosperity, and holidaymakers in their droves, returning.  Bosnia & Herzegovina, Croatia, Kosovo, Macedonia, Montenegro, Serbia and Slovenia today live in harmony each independent and keen on tourism.

Our tale is not of Dubrovnik, but of Kotor, in Montenegro, just 60 miles away, tiny in comparison, also a walled city from the time when Venice dominated the Adriatic.  In its own way it is even prettier and more interesting.  Dubrovnik is the aviation gateway to Kotor from the United Kingdom and most parts of Europe. There are limited services to the capital, Podgorica, which has an airport. 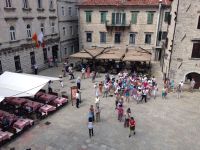 Montenegro is not part of the EU but uses the Euro as its currency.  Croatia is an EU member, but has its own money.  English is widely spoken.  Stirling notes are popular too.

The alternative entry is via cruise ship into the Gulf of Kotor, often suggested as the southern-most fjord in Europe, but in fact is a ria, a submerged river canyon.  With steep mountains and pretty villages on each side the scenery reminds one of Norway, or Canada’s Inner Passage, but far warmer and with more habitation.  If you are coming in by ship make sure you are up early.  It is wonderful two-hour passage.  The large liners cannot berth.  The tender ride puts it all in perspective. 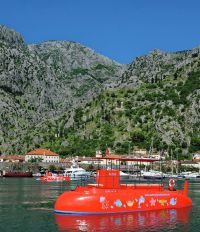 The yachts of the super-rich are regular visitors and this was once a home port of the Austrian Navy before the First World War.  Today a tired and leaking elderly corvette sits near a disused pier.  The modern Austria is landlocked.

If you are into boats one suggestion might be a ride in the Montenegro Submarine, in truth a semi-submersible, the cabin located below water sea level with windows allowing the passengers to feel they are on a real submarine.  The door on the upper deck remains so that visitors are also able to step up on the deck and enjoy the scenic ride.

At the port entrance you will find the Kotor Open Bus Tour, but not your normal double decker.  It is ‘hop-on hop-off’, the price (€20) including a walking tour of Kotor, and a 15-minute ride along the coastal road to the little baroque town of Perast with its Roman mosaics and museum.  The beach at Bajova Kula is a popular getting off point along the way.

The old walled city of Kotor is a short walk from the port entrance, to the right, and is full of mediaeval mansions and free 21st century wi-fi.  It is difficult to miss the information point. 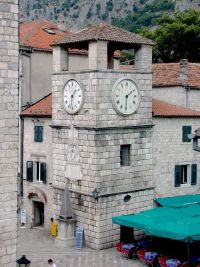 A UNESCO World Heritage site, the city was built between the 12th and 14th centuries and is filled with medieval architecture and historic monuments.  Extending over four kilometres the walls that have protected Kotor for centuries lead up to the fortress of Saint Ivan.  It is a long hard walk to the top, not recommended during the very hottest of summer months.

Through the entire city the buildings are criss-crossed with narrow streets and squares.  One of these contains the Cathedral of Saint Tryphon (Sveti Tripun), a monument of Roman culture and one of the most recognizable symbols of the city.  The Prince’s Palace from the 17th century and Napoleon’s Theatre from the 19th century are all treasures that are part of the rich heritage of Kotor.  Whilst it may seem daunting at first it is very easy to wander around the narrow streets, popping in and out of courtyards, and taking in the heritage and warmth of the ancient vista.

Montenegro‘s traditional cuisine is typically Mediterranean, with influences from other Mediterranean countries such as Greece, Italy and Turkey; but because of its geographical location, Montenegrin gastronomy also has links to Balkan countries.  Walking around the city there is just one attractive looking restaurant after another, at prices those from the UK would not have seen for years.  Called ‘palaces’ the mansions of the rich have for the most part been turned into boutique hotels featuring the ubiquitous wi-fi, full private bathrooms, air conditioning, and a 24-hour reception, as previously noted, with a real keenness to speak English.

Perhaps because it is small, and to date still something of a backwater as far as tourism is concerned, Kotor is special.  Whether from Dubrovnik, via Podgorica, or on a cruise ship, add it to your travel wish list. www.tokotor.me/en/o-kotoru.html 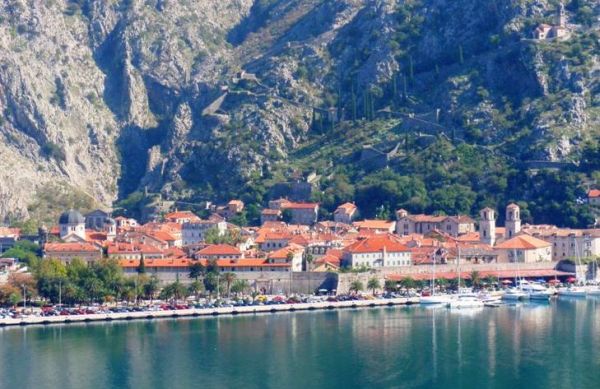 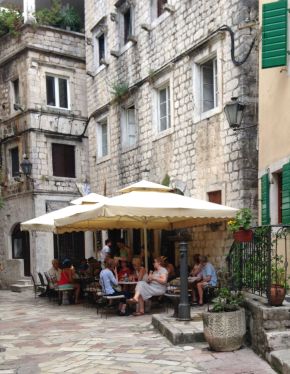 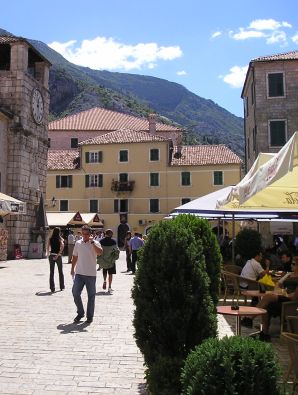 AND FINALLY: Avro to the end 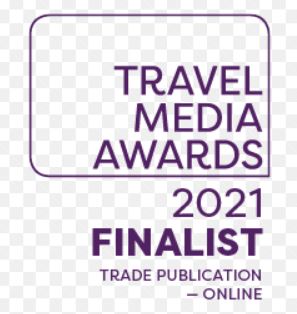 British Airways has taken delivery of its latest Boeing 777-300ER (G-STBL).  The aircraft flew into the airline’s home at Heathrow last week, stayed just a few hours before departing for its first scheduled service, the daily BA Mumbai flight BA199.

According to BA’s own schedule the service will now take 10 minutes longer at 8hrs 50mins.

In order to celebrate both the return of non-stop New York flights, with Norwegian Air to JFK, and Emirates A380 introduction, Gatwick Airport has unveiled two large-scale ‘urban sculptures’ designed to welcome and inspire passengers.

With the new T2 grabbing the headlines, Heathrow’s largest terminal, T5 is likely to be the focus of the airport shopping fraternity when Louis Vuitton inaugurates its first European airport store in December.

Inextricably linked to the history of modern travel, the Vuitton family has over generations been keen followers of technological advances in the world of aviation.

Whilst London continues to debate on the future regarding its position as a hub, Sydney has taken positive steps to introduce a second international airport.

Ryanair has struck a payment partnership with PayPal which will offer direct customers, business travellers, travel agents and corporate travel departments an additional option to book and pay for fares on the Ryanair network.

UK regulated rail fares will rise by 3.5% from January next year, following the release of July's inflation figures.

Under the formula, average fares in England are due to rise by July's RPI (Retail Prices Index) measure of inflation, plus 1%.  RPI was 2.5% last month, according to the Office for National Statistics (ONS).

Aer Lingus has now smoothly arrived at Heathrow T2, The Queens Terminal.  It is by far the largest operator in the new complex with up 24 flights a day to Belfast City, Cork, Dublin, and Shannon airports.

Domestic United First and United Business customers on United Airlines will find a major upgrade on their meal service from 1 September.

The airline says that further improvements will be coming along in early 2015, in all classes and including international flights.  Prosecco sparkling wine is also being introduced.