British Airways has taken delivery of its latest Boeing 777-300ER (G-STBL).  The aircraft flew into the airline’s home at Heathrow last week, stayed just a few hours before departing for its first scheduled service, the daily BA Mumbai flight BA199.

According to BA’s own schedule the service will now take 10 minutes longer at 8hrs 50mins. 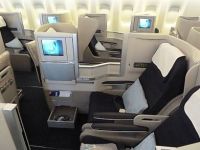 At one time British Airways operated 57 Boeing 747-400 aircraft.  That number has fallen to 48 as the airline begins the process of retiring the venerable (1969 first flight) Jumbo fleet, replacing it with Airbus A380, Boeing 787 and Boeing 777 aircraft.

Watching the new aircraft arrive, Allister Bridger, British Airways’ chief Boeing pilot said: “I think this aircraft is vitally important for the fleet, it’s a wonderful aircraft – pilots love it, it is very fuel efficient and hugely comfortable for customers.”