UK regulated rail fares will rise by 3.5% from January next year, following the release of July's inflation figures.

Under the formula, average fares in England are due to rise by July's RPI (Retail Prices Index) measure of inflation, plus 1%.  RPI was 2.5% last month, according to the Office for National Statistics (ONS). 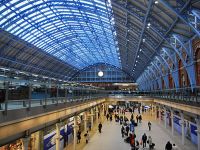 But under a "flex" rule, train companies can increase fares by 2% above the average, as long as the overall average stays at RPI plus 1%.

A detailed look at the cost of running the railways unveils some interesting facts, which can be compared with operating an airline.  Fuel accounts for just 4%, whilst staffing is put at 25%.  The leasing charges for the trains, plus interest and other fees take a whopping 19%.

Michael Roberts, of the industry body the Rail Delivery Group, said that although rail fares had increased above inflation for a decade, the number of passengers had seen "phenomenal growth".

"Compared with 15 years ago, we're now carrying twice as many passengers as we did then," he said.  But he added that rail services were partly a "victim of that success" because there was now overcrowding on some major services.   www.raildeliverygroup.com