ON TOUR: A Mediterranean cruise

Just a few weeks ago your Editor and wife took number one grandson on a two-week cruise into the Mediterranean from Southampton.  It was the third year running that the now 14-year-old has been treated to such a trip.  In 2103 it was  Norwegian Cruise Line  (NCL) Epic and last year P&O Ventura.  RCCL Explorer of the Seas was our choice for 2015. (see also CRUISENEWS SEPTEMBER in this issue) 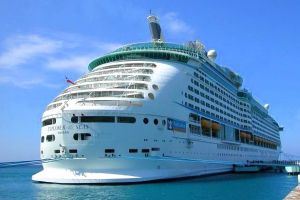 There is no doubt the young man enjoyed each cruise and would go again.

Each line has a professional kids department, dedicated to children from six months to 17 years of age. On American ships no alcoholic beverage can be purchased until 21.  With NCL & P&O the day is divided into three sessions, morning afternoon and evening, with a staff rest period in between.  For RCCL it is straight through.  The cut-off age differs slightly with each company but generally from 13 upwards the youngsters can come and go as they please.

From a parent’s point of view the check-in for each session with P&O was manual, making it hard work, and one had to take out one’s charge each time feeding was needed.  Likewise with Norwegian Cruise Line but at least the key card could be used and no paperwork.  With RCCL the eating was easy, food available any time via what is in essence an extension of cabin service.  With all the lines the kids' facility was available from dawn to past dusk (the hard working staff rostered for duty).

We asked our charge which was best.

In his view the shows were best on Epic, the organisation of goings-on unsurpassed with Ventura, and now past the age when he did not require to be supervised the whole time, the sheer range of activities with Explorer of the Seas.

This year there was no flying just a simple drive to Southampton, unloading by the porters at the terminal, easy parking, and with reception staff poised to help very quick boarding.  The handling agents have to be praised with the way they do things, but if you are travelling with a child of under 18 who is not yours do make sure that you have the correct legal documentation to take the youngster aboard.  The law of the land does not seem to apply.  Each cruise line operates under its own ideas.

One tip we have learnt from the three cruises.  If you are on holiday making three up with a youngster pay a little more and go for a larger cabin.  And check carefully that your accommodation does not offer awkward bunk accommodation for the third person.

Business Travel News took a look at Explorer of the Seas 1 June.  The ship this time around was completely full well over 3,500 passengers including the younger element accommodated with their minders, parents or otherwise.  Everything worked very well including the ice skating, the brand new FlowRider and the rock climbing.  The two main swimming pools were kept very busy, whilst adults were free to use a third pool in an area banned for children.

We chose ‘My Time Dining’ which worked very well, sometimes two of us, and occasionally three, and usually at about the same time with the same table and serving people.  What was particularly outstanding was the friendly attitude of all the staff, outstanding, particularly for such a large ship.  Yes the service desk did have long queues at certain times but the trick was to choose a visit when it was not busy.  On our preview visit we had sampled Giovanni’s Table, a traditional trattoria, Chops Grill steak house and Izumi Japanese cuisine.  We did the same again.  Very good and fair value.

Two innovations stood out.  One the culmination of modern technology and the other so simple that other ships ought to copy.

Unless you are completely daft it is impossible to get lost on the massive Explorer of the Seas.  At every sensible point a large touch screen (Wayfinder) is provided, a menu for the ship.  If you want to know where you are, how to get to your stateroom, find out what activities are on at that time, and the current dining menus.  All the information is provided.  And more.  It’s been rolled out on all the RCCL ships.

The other novelty is a simple notice pin-board.  You want to meet someone interested in say Italian Art, or organising a card school.  Just leave a message.  A very simple innovation but people were looking all the time.

Including the crew there were close to 5,000 souls on board Explorer for our 14-night trip.

Our 14 nights included Gibraltar, Villefranche, Civitavecchia, Livorno, Marseilles, Malaga and Lisbon as ports of call.  Plenty of sea days too.  Our charge for the most part stayed on board, his guardians happy in the knowledge that the electronic key card would not allow him off the ship without us.

For the most part on this trip we tried self-conducted tours, certainly cheaper than the ship’s excursions, with no guarantee of getting back in time to make the ship’s departure.  But we did not hear of anyone being left behind.


GIBRALTAR
Gibraltar is a British Overseas Territory and has been since 1704.  From time to time Spain makes noises about taking it over and life becomes less easy for the 30,000 inhabitants but 6,000 cross from the EU for work every day.  Sadly Explorer, like most cruise ships only docked for less than six hours, just time enough to take the cable car to the top of the Rock and play with the monkeys.  From the port you can walk into Town Square and soak up the very British atmosphere and use the Queen’s coinage.  www.visitgibraltar.gi  Also see BTN  10 August  and  20 July.


VILLEFRANCE
Next up was the tiny and delightful port village of Villefrance where the ship moored offshore in a very pretty bay.  It is a short run in by the ship’s tenders backed up by local craft only too keen to bring would-be spenders ashore.  Along the front is the railway station and you can take the train east into the very centre of Monaco, or about the same distance west to Nice.  At Monaco the local open top bus tour runs close to the station enabling a trip to the Royal Palace area, a slow viewing of the Grand Prix route, and also the opportunity to at least pass by the Monte Carlo casino.  www.frenchriviera-tourism.com


CIVITAVECCHIA
The port of Rome has a direct rail service to both Vatican City station (55 mins) and Rome Termini (75 mins).  It is normally reliable and if you are unescorted usually quicker and more comfortable than a bus.  The only problem is that the port area has been renovated and while a free transfer service is provided to the gate you then have to take another bus, or taxi to the station.  It is not far but it is a good walk.

On this occasion we took a half day ship’s tour to Bracciano and a boat trip on the volcanic lake of the same name.  Dominating the small town is the Odescalchi Fortress dating back to the 16th century and the romantic venue of the Katie Holmes – Tom Cruise wedding in 2006.  The marriage lasted until 2012.  The view from the top into the lake is quite something.  www.civitavecchia.net


LIVORNO
For whatever reason Livorno is not in favour with RCCL who seem to do their best to discourage clients from stopping and taking a look at a sort of mini Amsterdam.  Obviously if you have not been to Florence, one of the wonders of Italian talent that must have precedence, but other than its leaning tower what has Pisa got to offer?  In any event Livorno is a port city but once into the town itself it becomes alive, much of its splendour dating from times of the Medici, who imported skills and labour from Venice in order to give an adequate space to the maritime and commercial activities.  The Fortezza Nuova, surrounded by water on three sides is now a park and not far away is the Piazza della Republica, not changed much over hundreds of years.  The local hop-on hop-off tourist bus is of a single deck variety, a sort of low key service, nicely in keeping with an understating of the whole place.  When the British, and the Royal Navy, dominated the area it was called Leghorn.  www.livornonow.com


MARSEILLES
Marseilles had a certain reputation.  It was from here that the French left for North Africa, and where the Moroccans and others first landed on their way into France.  It was, and still is, France’s largest port, but times are changing.  Marseilles is now on the tourist map, the capital of European Culture 2013, and in 2017 European Capital of Sport.  The Calanques National Park is said to be the number one suburban park in Europe.  No longer do the cruise liners dock near to the centre of town.  The ship’s bus is required to take visitors to the picturesque and very busy Old Port with hundreds of small leisure craft all moored closely together.  From here you can take a ferry to the IF Castle, the grim prison of the Count of Monte Cristo.  With one eye on the clock we took the bus to the Notre Dame de la Garde, perched on a hilltop 500ft above the port.  www.marseille-tourisme.com


MALAGA
Malaga is a well-established cruise port and the terminal is within a fairly easy walk of the town.  It is the birthplace of Picasso, with a museum, the port dominated by the Alcazaba, a Moorish fortress dating from the 11th century.  Adjacent to the entrance are remnants of a Roman theatre dating to the 1st century BC, which are undergoing restoration.  Below is the Bullring, begun in 1876, and refurbished in recent times.  It holds just over 9,000 spectators.  If it is shopping you need in Malaga El Corte Ingles is the Spanish version of John Lewis, and likewise normally good value.  www.malagaturismo.com/en

LISBON
The good news about the Portuguese capital is that the big cruise ships can now moor within a short walking distance of the Praça do Comércio, the very centre of the waterfront, with the Alfama and its Fado music nearby and also Lisbon Cathedral.  Lisbon is very spread out and once again we gained the top deck of the tourist bus, good value as it took us up the Avenida da Liberdade to the Eduardo VII Park  (named after the English King who visited Lisbon in 1902), the Gulbenkian Museum, and then towards Monument to the Discoveries and the Belem Tower.  www.visitlisboa.com