It has been a very newsworthy couple of months regarding ships as the UK cruise industry reaches out towards two million annual packages.  It has not made it yet (1.7m is predicted for this year) but there is much new capacity being very publicly unveiled, and the established stars are also doing well in the publicity stakes.

The Queen named Britannia in March; Anthem of the Seas made its debut just a few weeks later and  BTN  in this issue introduces Explorer of the Seas following a major refurbishment.

Liverpool set new standards for city hospitality when it hosted Cunard’s three Queens last week.  It was a joyous homecoming for the line which was founded 175 years ago by a Canadian gentleman from Halifax, Nova Scotia.  Sir Samuel Cunard would have been proud of Queen Mary 2, Queen Elizabeth and Queen Victoria as they steamed in line astern past the magnificent Cunard Building (once the company headquarters) and the much newer Liverpool Cruise Terminal.  The weather was perfect and the crowds enormous.  The TV and newspaper coverage was enormous, worldwide. 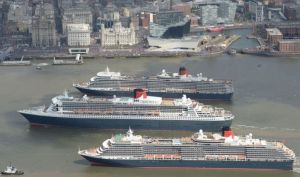 Liverpool Maritime Mercantile City is a UNESCO World Heritage Site.  The Riverside Walk offered fantastic views of the ships and overlooks the small cruising dock facility.  The single ship berth is far too short for QM2, 1132ft long, the ship extending over 300ft at the sharp end.

Cunard’s first ship Britannia departed on her maiden voyage from Liverpool to Boston via Halifax on 4 July 1840.  On 30 January 1968 Franconia made the last Cunard departure from Liverpool to New York, the company saying that the service had been “suspended”.  4 July this year will see QM2 leaving once again for New York.

For the record Queen Mary docked on Sunday morning (24 May) facing downstream, a tricky manoeuvre according to Captain Christopher Wells, and spent the day being viewed by massive crowds on the quayside.

Those on board were able to disembark and take in some of what Liverpool has on offer including The Beatles Experience, Museum of Liverpool, and the Merseyside Maritime Museum on the Albert Dock. 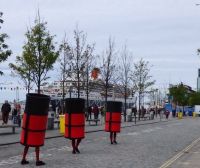 The ‘City Explorer’ bus, hop-on-hop-off, ran just by the terminal and provided a one hour tour of the city including the Cavern Quarter, both the Metropolitan Catholic Cathedral, "Paddy's Wigwam", and the more traditional Liverpool Cathedral, in Gothic style by Sir Giles Gilbert Scott, designer of Battersea Power Station and the obsolescent red telephone box.  The South John Street shopping complex provided a background to “The Crossing”, a 3D sound rendition of the relationship of Liverpool and New York.  The quayside (Riverside Walk) offered a wide promenade, the City of Liverpool providing plenty of music and entertainment.  For the locals, and the not so locals, the occasion provided a fine (free) day out.

The Sunday evening included a VIP dinner in the Todd English restaurant on board QM2 for the Lord Lieutenant of Lancaster, Lord Mayor of Liverpool and 100 VIP guests including Michael (Lord) Heseltine, who led the regeneration of Liverpool in his time as a Cabinet Minister and is now a Freeman of the City.  The Three Graces, the Royal Liver Building, Cunard Building and the Port of Liverpool Building formed the backdrop for a 'light' show.  A massive firework display followed.

The Monday will be remembered for a long time, QM2 leaving her berth at 10:45 to join Queen Elizabeth sailing in from Kirkwall in the Orkney Islands, and Queen Victoria from Guernsey.  The ships then passed The Three Graces, the Red Arrows did a flypast.

By 14:30 “Mary” was on her way to Guernsey and with “Elizabeth” docking at the terminal.  How much smaller she seemed.  “Victoria” moored in the Mersey opposite, the Mersey Ferries providing a tender service for her visiting passengers.  Late on Monday evening “Elizabeth” left for Southampton, allowing “Victoria” to dock.  It was not until late Tuesday afternoon that Victoria departed, Southampton bound too, followed by a flotilla of small boats.  Sadly the party was over.

As noted Queen Mary 2 is due to return on 4 July, American Independence Day, to re-enact the first transatlantic crossing from Liverpool to the New World in 1840 – with 400 of her passengers embarking in the city for the journey to Halifax, Boston and New York.

Andrew Struthers, Cunard Commercial Director, hosted a press conference at the Crowne Plaza hotel on the quayside.  “175 years is a very special milestone, and we’re delighted we’ll be embarking 400 people to cross the Atlantic.  It will be the first time people will have been able to embark at Liverpool to cross the Atlantic for nearly 50 years.

Sadly however, the facilities at the Cruise Terminal do not allow for a full ship turnaround.  But Liverpool will continue to be a very special part of Cunard and long may we continue to come to Liverpool in years to come.

“Until there are substantial improvements to the capacity of the terminal, it’s very difficult for Cunard or any other cruise company to consider big ship turnarounds.”

“That shouldn’t dismiss the fact that what an amazing occasion it’s going to be again on July 4.”

But he added: “If there were bigger facilities, or the opportunity came up again, then of course we’d look at it, because Liverpool and Cunard are inextricably linked.”

To be fair to Liverpool noises are being made regarding a development of the docking facility. 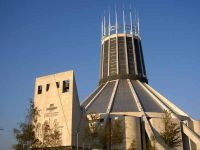 Liverpool is now a tourist city.

Some say this is because of The Beatles, but Cunard would argue that it was Sir Samuel who started it all off.

Large cruise ships now visit the Mersey but it is usually one at a time, and just for the day, no overnights, nor as a turnaround port.  Cunard seems willing to return on a more permanent basis.

Mr Struthers made his point.

“Yesterday all the ships were turned away.


Explorer of the Seas 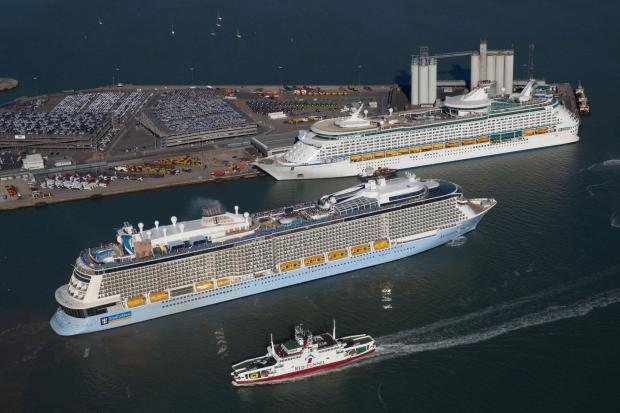 For the monthly cruising supplement (See "Billion Dollar Cruise Ship"  BTN  4 May issue)  reported on the spectacular naming ceremony for Anthem of the Seas.  It was a 48-hour (Monday-Tuesday) extravaganza with the Wednesday a sort of day of rest before returning to the Southampton dockside for the arrival of Explorer of the Seas, she having just taken part in a 40-day, US$100m bow-to-stern full revitalisation.

RCCL got it more less right with “Explorer” but after 15 years a midlife update offered the chance for the latest ideas and technology to be added, the most ambitious being 81 new Virtual Balcony Staterooms – an innovative design concept unique to Royal Caribbean which offers expansive real-time views of the ocean and destinations from an inside cabin.  We are told you will not be seasick if the ship has any motion, your balcony video view will go up and down but your brain is even cleverer not noticing the movement.  (In any case there is a very sophisticated stabilising system fitted).

Highlights of Explorer of the Seas’ revitalisation include 24 new Panoramic Ocean View Staterooms, offering floor to ceiling wraparound panoramic windows.  All the cabins (the Americans like to call them staterooms, which sounds posher) have been re-carpeted and flat screens added.  There are 1,557.

For the Southampton cruising season coffee and tea making machines have been added to the cabins (staterooms if you like).  She in in New Zealand during our winter.  They appreciate tea as well.   But will they be put away when back in the US market, or are we going educate the Yanks?  One American tradition does remain for the European season.  Any extras have an 18% tip added.

Done away with is the printing of all those unwanted photographs and the search.  The print-on-demand Focus Photo Gallery makes it very easy.  The art gallery is now spread throughout the ship displaying original works.

The Card Room (tables for cards and complimentary board games), The Diamond Club, NextCruise and Star Lounge are all new.

Stuart Leven, Managing Director, UK & Ireland for Royal Caribbean International, said: “We’re on a mission to change holidaymakers’ expectations and just as Anthem of the Seas sets sail this week on her maiden voyage, a newly refurbished Explorer of the Seas arrived in Southampton today.  We are constantly working to bring the innovation of our newest ships to existing ships across the fleet, ensuring that every ship is our best ship.”

Finally we are assured of the same wi-fi installation as Anthem of the Seas, certainly the quickest experienced to date at sea, and in fact faster/as fast as BTN’s office.  Two weeks in the Med with a teenage grandson.  We will be reporting on a family friendly ship.

Sailing for her first European season from Southampton, Explorer of the Seas will provide a range of new and interesting itineraries to destinations including the Mediterranean, Northern Europe and the Canaries.  www.rccl.com

CARNIVAL is making a return to Europe for 2016 with Vista which it says is its largest and most innovative ‘Fun Ship’ to date.  From a unique suspended cycling experience called SkyRide and the innovative Family Harbour staterooms and suites featuring a “family concierge” to cruising’s first IMAX Theatre, Carnival Vista promises fun for the whole family.  “Carnival is the number one cruise line for families carrying more than 700,000 children annually and Carnival Vista will build upon our leadership position in this area with incredible outdoor attractions and engaging indoor spaces specifically designed with families in mind,” said Christine Duffy, President of Carnival.   www.carnival.co.uk

CRYSTAL CRUISES has a new owner.  Genting Hong Kong (GHK) has completed the acquisition of the luxury operator from Nippon Yusen Kabushiki Kaisha (NYK), and says it plans to have a new ship in service for 2018.  Crystal launched its 5-star package with the Crystal Harmony in 1990, sister ships Crystal Symphony and Crystal Serenity joining the fleet in 1995 and 2003, respectively.  Since Harmony’s sale in 2005, the line has very successfully operated global itineraries but clearly it needed an owner with ambition.  Established in 1993, GHK is part of the Genting Group, a global hospitality and leisure company.  GHK wholly owns Star Cruises and is a major shareholder of Norwegian Cruise Line.   www.crystalcruises.co.uk

P&O is really pushing the hugely popular Strictly Come Dancing themed cruises in 2015.  Guest judges joining later this year will be none other than Strictly's pro dancer and household favourite Anton Du Beke and former judge Arlene Phillips.  Anton will be guest judge on Azura’s 14-night Baltic Escape from Southampton 20 June, while Arlene will now be joining Britannia’s 14-night Canary Islands cruise on 25 July, again from Southampton.  As one of Strictly’s most popular professional dancers, Anton has been with the show since the series started in 2004 and will be returning to the BBC line-up for 2015.  Arlene has also been a part of the Strictly family since its launch and most recently has been giving her expert views on BBC2's It Takes Two.  www.pocruises.com

STAR CLIPPERS, the tall ship sailing specialist, has announced that it has started building a fourth vessel to add to its fleet of graceful square-riggers; its first new-build since the launch of Royal Clipper in July 2000.  The new vessel, yet to be named, will be the biggest and most ambitious Star Clipper to date and will be launched in the second half of 2017, carrying 300 passengers; measuring 8,770 tons and powered by more than 6,350sq m of sails.  There will be a watersports platform in the stern for use when the ship is at anchor and a variety of cabin grades, including 34 suites with balconies and four luxurious owners’ suites.  Incorporated is a swimming pool.  A restaurant in the light-filled atrium will accommodate all passengers for open-seating dining.  www.starclippers.co.uk