ON TOUR: Sri Lanka & the west coast of India

During March the Editor and wife embarked on a 15-night cruise from Colombo (Sri Lanka) to Muscat (Oman) via the west coast of India.  It was a memorable trip that actually started with three nights in Dubai  (See BTN 11 May), highly recommended as an exciting stopover if your final destination is a point in the East. 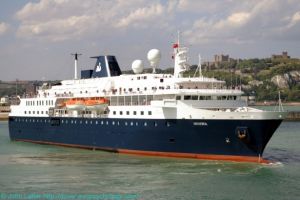 Our mode of travel was Swan Hellenic’s Minerva (see also BTN 14 January 2014) and the issue 14 March produced at sea.

Cruising is a wonderful way of visiting a number of countries in short time.  Our package included shore excursions but every night we were back on the ship.  No need to pack and unpack and our friendly waiter was always ready to serve a fine meal in the evening.  And he knew we finished with coffee.

We call our visits ‘tasters’.  If we really like a place we mark it down for a longer return.  One such is Colombo, capital of Sri Lanka and main port, a thriving metropolis of half a million, with the Old City Hall a major feature, a reminder that Ceylon was British until 1948.  Here English is the authorised ‘link language’ but is much used in the administration.  India followed, where English is an official speak.  We did a ‘selfie’ tour of Colombo when we arrived late afternoon, the student son of a London-based acquaintance our guide.  With internet and cell phones it was easy to organize, and he sorted out a taxi.  Brilliant. 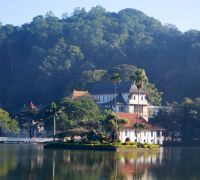 Our chosen tour from Colombo Harbour was Kandy which meant an 06:15 departure not returning until 12hrs later.  For those who had come direct on Emirates from Gatwick it was a particularly long day, but “Swanners” are a hardy lot and the comfortable coaches and smooth roads provided some time to sleep.

Kandy is the second largest city in the country after Colombo, and was the last capital in the era of the kings' of Sri Lanka.  It lies in a hilly area of tropical plantations, mainly tea.  Kandy is both an administrative and religious city and is also the capital of the Central Province.  Kandy is the home of The Temple of the Tooth Relic, one of the most sacred places of worship in the Buddhist world.  It was declared a world heritage site by UNESCO in 1988 and sits by a large and most attractive lake.  We soon got used to the idea of taking ones shoes and socks off and making sure we were respectfully dressed.

One of the highlights of the whole trip was a visit to the Royal Botanical Gardens, just outside the city.  It attracts two million visitors a year and is noted for its orchid collection.  Closely associated with Kew Gardens it goes back to antiquity but was formally establish in 1843.  Famous visitors are invited to plant a tree, the Queen and Prince Philip twice in attendance, previous British Royals including the future King George V and Queen Mary in 1901 and Edward Prince of Wales in 1922.  Add in to that the future Tsar (1891) and for good measure Yuri Gagarin.  It covers 147 acres. 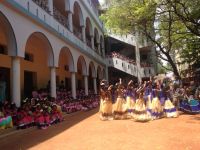 The best way to describe the countryside around the port of Tuticorin, about as far south of India as you can go, is flat.  It is not the most inspiring of places with a number of industrial complexes but include a visit to a school for up to 11-year olds where one of the main goals is to teach the 650 youngsters English.  They don’t get many cruise ships visiting and whilst the smaller ones were somewhat shy, both boys and girls knew about the English Premier League.  We won’t mention what team they mostly supported.  A special show by the different age groups rounded off a memorable visit.

Cigar making is a local small industry.  Cuba does not need to worry as local women produce the rolled tobacco leaf product by hand.

Next stop Kochi, a very busy port and the largest city in the state of Kerala.  In 1947, with the British withdrawal Cochin was the first princely state to join the Indian Union willingly.  Whilst the Portuguese had been the initial European country to colonise, it was just for a short period although it was here that Vasco de Gama, the first global navigator, died.  Minerva overnighted which allowed for a long water tour of its picturesque backwaters, in the middle of which, and our lunch spot, was a Ramada. Rural life could be seen as we passed rice field after rice field.  A very pleasant interlude

The Paradesi Synagogue, in a corner of Jew Town, has been established for more than 400 years and is said to be the oldest in The Commonwealth.  Jewish history in this area goes back over 2,000 years.  Shoes are not allowed on the tiled floor, but there is no need for head covering.  It was built on land, adjacent to the Mattancherry Palace, given by the erstwhile king of Cochin.  The streets around are an open air market abounding with shops.  The Palace itself dates from Portuguese times and features Kerala murals depicting Hindu temple art, portraits and exhibits of the Rajas of Kochi. 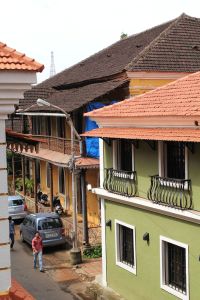 The Portuguese stayed in Goa until 1961 when it was forcibly annexed by India.  Unlike the British, who handed over the rest of the sub-continent in 1947, dictator Salazer put up a fight, albeit a very short one.

Goa needs more than one day for a visit, and it is now very much on the tourist trail.  Whilst the Portuguese have gone, and after a period of decay, their heritage is now being preserved no more so than in Fontainhas the old Latin Quarter of Panaji, the state capital.  There is still a great deal of work to be done but you could be in the old part of many European cities with narrow and pretty winding streets, old villas and buildings with projecting balconies painted in the traditional tones of pale yellow, green or blue, and roofs made of red coloured tiles.  There is a quaint charm about the place.

Religion played an important role for the Portuguese.  The Sé Cathedral, is one of the largest churches in Asia.  The whole area is a World Heritage Site and includes the nearby Basilica of Bom Jesus with ruins of the St. Augustine Church under excavation.

Called the gateway to India, and not just because of the impressive arch named thus, and completed in 1925 to commemorate the visit King George on his Coronation Tour of 1911, Mumbai (once Bombay) is the seaborne entry port from the west for the whole of the peninsular.  It is a teeming megalopolis with the population number unknown, but probably topping 20m.  It epitomises extreme poverty and hosts one of the world’s great hotels, The Taj Mahal Palace, an oasis (and well worth a visit) amongst a sea of humanity.  Mumbai was the home of Ghandi for many years, his residence now a well organised museum Mani Bhavan.  He was born in Porbander, our next port of call.

If Mumbai wants to become a regular on the cruise map it needs to sort out its docking arrangements.  Passengers do not like taking a bus to go landside, and Indian bureaucracy regarding passports is something to be believed.  Jobs for the civil servants.  A proper terminal requires to be built in the tidal area of the port. 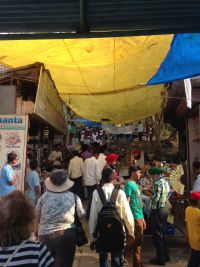 Elephanta Island, a 75 minute boat ride from The Gateway across the bay, contains some remarkable bas-reliefs and the uphill walk through the market from the pier interesting, even more so if a chair ride is undertaken.  It is 120 steps.

With a night-stop The Taj, as it is known locally, can be taken in for dinner, the rooftop Souk restaurant recommended.  It will not break the bank.

The Chhatrapatī Shivaji Mahārāj Vastu Saṅgrahālay, still called by most the Prince of Wales Museum, is not far from the Taj and surrounded by a garden of palm trees and formal flower beds.  It houses approximately 50,000 exhibits of ancient Indian history from the time of the Guptas, Mauryas, Chalukyas and Rashtrakuta.

Take a look at the world's largest outdoor laundry, Dhobi Ghat.  Purely driven by (many) hands.   The Victoria Terminal railway station is also a MUST.  Don’t bother with the official Indian name, the everyone likes the old one.  It is a stunning piece of neo Gothic architecture.

One of the poorest parts of India, and not far from the Pakistan border, is the little town of Porbander.  It is the birthplace of Ghandi (born 1869 and assassinated 30 January 1948) his family home now a place of pilgrimage for many Indians and of course tourists.  We were made very welcome.  We also visited Bharat Hata temple, opened by Ghandi in 1936 and containing a statue to the founder of non-violent protest and a huge map of India covering the floor.

Our visit to India was completed with an exciting ride in a tuk tuk or auto rickshaw manufactured, says the badge, by Piaggio.  Sad to say it has nothing to do with the aero manufacturer with the same name which is a pity as it is a certainty that a bright aircraft engineer could have found some way to fit a reverse gear.  If a tut tut needs to back up the driver has to get out and push.  But the tut tut is a great way to complete a fantastic tour of India. 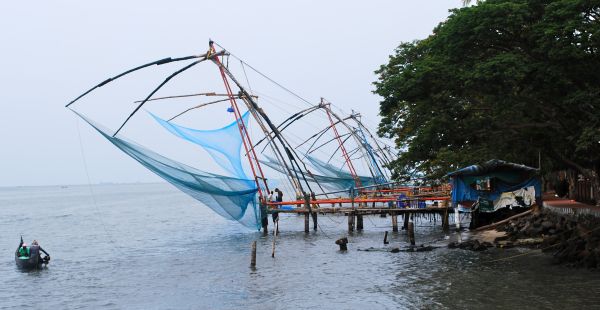 Very interesting and detailed article, have always wondered about cruises around the Sub-Continent. Thanks for your insight.