ON TOUR: Cuba - an enigma within an enigma.

In the last two issues of Business Travel News Editor Malcolm Ginsberg has described Swan Hellenic Minerva and its pre-Christmas voyage around the Caribbean.  However, the highlight of the trip was the virtual circumnavigation of Cuba and visits to Santiago de Cuba, Havana and Trinidad.  It was what the great majority of passengers had come for.  American-owned cruise ships are banned, which is good for Swan and the other small operators. 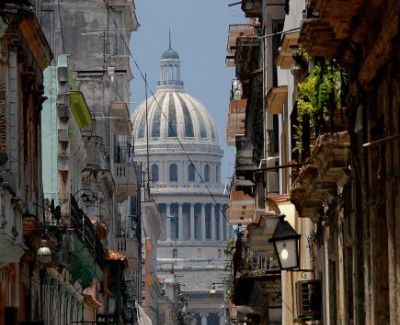 Cuba is an enigma within an enigma.  It is the world’s only remaining true communist state if you discount North Korea (totalitarianism) and China with its own form of capitalism.  In fact Cuba has been a dictatorship more or less since 1933, one following the other, with firstly Fulgencio Batista, and since 1959 when the young lawyer Fidel Castro led a revolution.  Until the Castro takeover Havana, less than 90 miles from Miami, had been the centre of US offshore Mafia-style crime and had prospered from it.

Today Cuba is in many ways a throwback from those times.  Many of the cars, the huge American jalopies of the 1950s, in pristine condition (some with Russian diesel engines) ready for tourists and also used as taxis.

Minerva’s expert on Cuba was John Dew, Spanish speaking and Her Majesty’s Ambassador to Havana from 2004 until 2008 (followed by the even trickier mission to Bogota, Columbia, until 2012).  John was contracted to give just five 40-minute talks.   Ever a public servant John was always around and ready to answer questions.  In the most diplomatic of manners he described it as trying to fit 25 hours into 24.  His wife Marion gave an informal insight into running an Embassy.  She could have been paid by Her Majesty's Government, but at the local rate.  Marion declined preferring to be independent, and still did the job.

It was Canon Bursell (see BTN 6 January) who briefed a captivated audience on the Cuban Missile Crisis of 1962.  We nearly went to war. 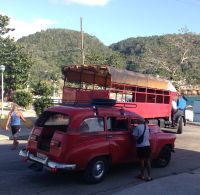 As a result of a universal health care service, life expectancy in Cuba is 78 years. The quality of public healthcare offered to citizens is regarded as the "greatest triumph" of Cuba's socialist system.  The education structure is also highly regarded but its greatest failure is probably in farming where a country which should be self-supporting in foodstuff has to import.  The ration book prevails.  Britain used such a system in World War II, finally ending in 1950.

For the most part the middle class fled to North America in the years soon after Castro came to power.  The current generation only knows the communist system.

Even the money is odd.  Cuba has two currencies and must be the only country in the world with such a system.  The convertible peso (sometimes given as CUC$ and pronounced ‘cook')  and is based on the US Dollar at a one to one ratio (less 10%).  There is also the Cuban peso, worth one twenty-fourth of the CUC$ which is used by Nationals.  US Dollars are supposed to be taboo once past the bureaux de change, as are Scottish banknotes, but Canadian dollars, Sterling and Euros are OK. 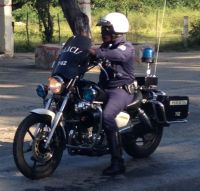 As a visitor, what stands out is buildings that date back to the first half of last century and for the most part are distinctly shabby, and often crumbling, reminiscent of East Berlin when the wall came down.  Some serious work is being undertaken and the renovated centre of old Havana reminds one of many a Spanish city.  There are no advertising boards to be seen and credit cards can be used as long as there is no US connection.  American Express is definitely taboo.  Nobody has heard of wi-fi.  Internet is slow via the telephone system.  McDonalds and Cola Cola are not around.  Produced locally, cigars and rum are not in short supply.  However the shops for the most part are empty.  Cuba has a very low crime rate and personal safety is generally no problem.

Canada supplies the largest numbers of tourists, but the British do come with both charter and scheduled flights, for the most part staying in fully-inclusive enclaves of good quality. 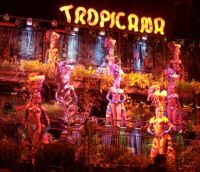 Havana was once famous for it night life.  Things have not changed that much although the choice is limited.  The Tropicana Night Club has existed for 60 years and been graced by the likes of Ella Fitzgerald, Sammy Davis and Frank Sinatra.  The nightly show is breathtaking with 200 singers, dancers and cabaret acts, plus a splendid orchestra.  Havana is noted for jazz and the ship’s musicians made a beeline for the area around the Plaza Vieja.

Our initial taste of Cuba was the port city of Santiago de Cuba, in December surprisingly the first cruise ship of the year.  We were made very welcome with the local dancers and the merest of formalities.  The worry of visiting Cuba was quickly forgotten.  Santiago de Cuba was pleased to see the British ship and the local police even supplied an escort for our tourist vehicles.  Now we know what it is like to be a VIP with the traffic on both sides of the highway forced to stop and the red traffic lights forgotten.  The children wave to you and everyone smiles.

On 1 January 1959 Fidel Castro proclaimed the victory of the Cuban revolution from a balcony on the city hall. 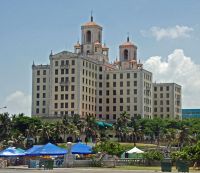 For the full day visit we chose the Grand Piedra National Park, covering 300sq miles, which takes its name from a rock outcrop in the Sierra Maestra mountain range.  Our modern mini coach struggled to Grand Piedra, where we were faced with 459 steps to the summit.  Well worth it mind you.  Also taken in was the stepped Cafetal La Isabelica garden which supplies vegetables and flowers to the city.  Like anything else of any size it is a co-operative.  Castro’s farmhouse base during a period of guerrilla warfare before the takeover was also on the itinerary.

In its own way the seaborne entrance to Havana is as interesting as any port anywhere in the world with massive forts on both sides of the channel.  Already docked at the purpose-built cruise terminal was the Greek liner Louis Cristal on charter to the Canadian operator Cuba Cruise and getting ready for its first seven-day trip of the winter season.  Reports indicate a high standard with the catering brought in from Canada. 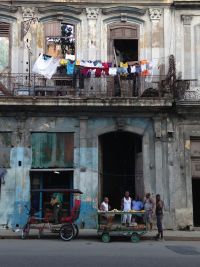 Our stop in Havana was overnight and 48 hours, not nearly enough for one of the great cities of the Caribbean.  The Spanish arrived in 1514 and in the 1700s it was the third largest metropolis in their colonial empire behind Mexico City and Lima.  Just before US independence the British took over Cuba, and then swapped it for Florida.  The Americans tried to buy it back and Spanish rule eventually ended in 1898 with the US as its protector.  Today it has a population of 2.5m, a strange collection of decaying buildings, those that have been remodelled, and many more in a state of renovation.  Havana’s monumental Columbus Cemetery is the largest in the world, memorials mostly in fine condition, and a testimonial to bad communist co-operative thinking.  The effort put in to commemorate those gone could have been far better used in improving the housing for the living.

There were two tours as part of the package for the Minerva visitors (you did one the first day and the other on the second), one walking around the old town, the other by coach taking in greater Havana and views from the other side of the harbour at the fortress of San Carlo.  Some fitted in Hemingway too, including a visit to Cojimar town where he was inspired to write ‘The Old Man and the Sea.

The domed Capitolio building is impressive, and deliberately slightly larger than the original in Washington.  The Gran Teatro Opera House is in the process of being rebuilt (Cuba is very much into opera and ballet), whilst the Palacio de los Generales is now the city museum, with an indication of how Cuba is moving.  Capitalist locals are on hand to help with guidance, for money, the authorities for once turning a blind eye.  The massive art deco Hotel Nacional near the front is now 80 years old, the building is historical, both grandiose and charming and by all accounts the place to stay following in the footsteps of Winston Churchill, Ava Gardner, and scientist Alexander Fleming.  Under communist rules private enterprise restaurants are for the most part banned, this rule circumnavigated by enterprising entrepreneurs opening their houses with up to 50 covers!  Even a commissionaire.  We managed the railway station too, but public transport in Cuba is pretty basic. 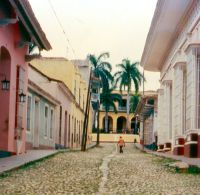 The tiny port of Casilda, for Trinidad, is a bit off the map for cruise ships and with its shallow depth touch and go whether Minerva would make it.  However another warm welcome with dancing girls but no police escort this time.  The Manaca Iznaga sugar estate was an interesting visit but Trinidad City, a UENESCO World Heritage Site since 1988, one of the highlights of the whole trip.  With funding from the UN it is one of the best preserved cities from the time when sugar was the king and the main industry of the region.  Only a few square blocks in size the historic plaza area has cobblestone streets, pastel coloured houses with wrought-iron grills, and colonial era buildings including the Santisima Cathedral and the Convent of San Francisco, now a museum, the roof accessible via a very narrow spiral staircase.

Make a beeline for Cuba.  It is changing fast and just like some parts of what was Eastern Europe, in a few years the totalitarian regime would have been forgotten.  Let us hope that an influx of tourists do not spoil the wonderful ambience of the whole island.  Keeping the Americans out may be the legacy of Castro, but one would hope that they do not rush back too quickly as the people of the country discover that the world has moved on since 1959.

We are going back at some point in time for a longer stay. www.swanhellenic.com   www.travel2cuba.co.uk