Jane Stanbury has been off on her travels again. 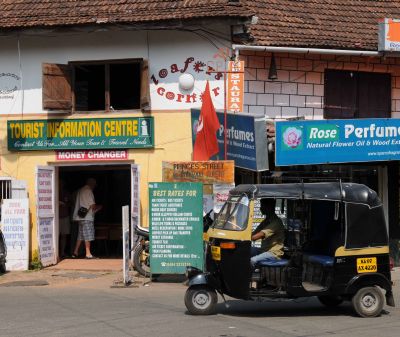 Italian travel writer Nicolas Conti famously said in the Middle Ages, “If China is where you make the money, Kochin is surely the place to spend it”.  Fort Kochin, marks the near central coastal point of Kerala, India’s most southern state on the western side.  This tiny area has played a vital part in international trade since Roman times and was once an integral route between China and Europe.  Today Kochin has come full circle returning to its original status as a key Indian trading point. But don’t look for a fort.  It does not exist.

In recent years, Ernakulum, the industrial region, has expanded upwards and outwards and neighbouring Vallarpadam island now proudly boasts India’s largest port.  A new container terminal, opened in 2011, is capable of handling the latest generation of sprawling super tankers.  On completion of its three phases it will become India’s logistical lynchpin.  This further strengthens Kochin’s position as the commercial capital of Kerala and one of the state’s most cosmopolitan cities.

However the old Fort area continues to quietly languish on the shores of the Laccadive Sea (where the Arabian Sea and Indian Ocean meet) with one sleepy, disinterested eye cast towards the urban development.  International tourism now occupies what was once the dominion of European nations.  The Portuguese began trading in the early 1500s and ruled until the Dutch ousted them in the early 1680s.  They reigned until 1795 when the British took over.  Fort Kochin finally became Indian following the nation’s independence in 1942, yet much of the colonial history remains paying homage to the diversity of European cultures and providing a fascinating living museum for visitors.

At the most northern point of the island relics of the earliest visitors to Kochin can be found in the form of Chinese fishing nets.  Nets are carefully strung on teak wood and bamboo poles and are dunked via an ingenious cantilever system into the water.  It’s a grown up version of a rock pooling net that catches whatever swims by.  Said to have been erected by traders from the court of Kublai Khan in the late 1350s, these emblematic symbols of Kochin are raised each night around dusk.  Immediately a haphazard fish market appears featuring red snapper, kingfish, squid, the most enormous prawns and other exotic breeds.  Entrepreneurial types have set up barbeques nearby on Vasco de Gama square so the freshest of fish meals become possible.

Whilst grave spotting is not on most tourists’ agendas one of Fort Kochin’s must-sees is the Dutch Cemetery which overlooking the sea salutes the hundreds of Europeans who left their homelands to colonise far-flung locations.  Access is allowed by a single employee of the Christian Church of South India which now runs the small but mystical graveyard.  The enthusiastic retainer guides you to huge tombs reserved for the elite and diminutive stones for the children.  Major Generals from the British fleet lay alongside Dutch merchant traders and Portugese aristocracy.  The tombstones are completely weathered but there is something enthralling about a burial site representing so many cultures.

In stark contrast to the walled graveyard the imposing church of St Francis welcomes visitors to explore its mixed history.  Originally built as a Catholic house of worship in 1503 by the Portuguese it is thought be the oldest European church in India.  The timber and stone structure was renovated by the Dutch who converted it to Protestant usage, until the British changed it to an Anglican church.  These days it is home to the Church of South India.  Curiously the church flanks the Parade Ground, once the marching ground of the litany of military occupants, these days, like many of the scorched open wastelands, the ground is used by the local schools for running, playing and of course cricket. That’s when the goats aren’t chomping on the stubbly grass.  Like the surrounding streets the parade ground is lined with piles of dirt.  Keep your country tidy is not a notion to have reached India.

The Paradesi Synagogue is the oldest active synagogue in the Commonwealth and was built in 1568.

Ambling along the potholed streets and alleys the constant chants of the auto-rickshaws, colloquially known as tuk-tuks offering tours of the city can be wearisome.  Enterprising drivers take an innovative approach and “Helicopter Sir” certainly caught our attention.  These ubiquitous three-wheeler vehicles are a common means of transport for the locals, but can seem like a hair-raising option for the tourist.  In fact the vehicles are incredibly stable and for less than 70 pence an hour the drivers will take you on a tour of the Fort area, out to the wider regions of modern Kochin, and should you wish on to the urban sprawl of the industrial area of Ernakulum. 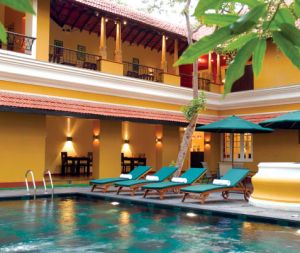 Whilst the relaxed nature of Kochin lulls you into Indian life, a comfortable hotel is still vital and one of the best in town is The Tea Bungalow.  Offering a welcome haven from the dusty sun-soaked hubbub outside, this boutique property, which was once part of the Brooke Bond estate, is celebrating its centenary.  Transformed into a charming boutique hotel over the last decade the eight rooms divided between two colonial houses are individually designed.  All feature a contemporary blend of traditional India and modern amenities.  The courtyard pool is a welcome sight after a hard day exploring or lengthy excursion to one of the Kerala backwater villages.  However the highlight has to be the food. The chef has spent the last 11 years at a 5-star hotel in Dubai and it shows.  Like the heritage building, the Café du Mahé menu seamlessly blends traditional Indian dishes with popular modern international dishes.  Homemade samosas and Malabar curry (a fish-based curry typical of the area) sit alongside pasta with freshly cooked prawns or stuffed chicken breasts.

Fort Kochin is a gentle introduction to the Indian continent.  There is a certain familiarity in the ghosts of colonies past and the preservation of its beauty belies its real importance to 21st century Indian commerce.  With near 100% literacy, over 40 newspapers in the state alone, and an endless hunger for modernisation, Kerala will undoubtedly become a major player in Indian economics.  It should pay homage to its ancestry and preserve Fort Kochin for the future as there is no better way to begin exploration of one of India’s most beautiful states.

Stay at The Tea Bungalow – www.teabungalow.in

Travel with www.keralaconnections.co.uk – what they don’t know about Kerala isn’t worth knowing