When BTN was invited to join the naming ceremony for the AMADouro river cruise ship at Porto, it seemed an ideal opportunity to extend an overnight trip from Gatwick to something longer (See also BTN May Cruising in this issue and ON TOUR 6 July 2015). 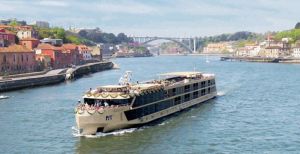 Rather like Liverpool Football Club, who were also recent visitors (and had been a year previously), it was for BTN a most successful return trip and just like the current Premier League leaders we too made our main base The Yeatman, a 5-star property in Gaia on the south bank of the Douro River.

BTN reviewed The Yeatman in 2015 and sharp readers would have spotted an honourable mention in a recent AND FINALLY.  No time to try the 2 Michelin stars tasting menu in the gastronomic restaurant, nor the popular Thursday ‘Wine Diners’ weekly wine tasting. Perhaps an excuse to come back when the “World of Wine”, a huge hospitality and entertainment complex further down the hillside, is completed next year.

Porto has now been added by TAP from London City Airport and with the same Embraer 190 that is used from Gatwick. The on-board service is full Economy and with a 2+2 layout very comfortable. The downtown Porto taxi fare is €15 and there is also the Metro.

We chose to stay for the first two nights at the Infante Sagres hotel in the centre of the city, acquired in 2017 by The Fladgate Partnership, owner of The Yeatman. This 350-year-old family wine business has long been the proprietor of such famous brands as Croft, Fonseca and Taylor, and now has an expanding hotel portfolio. 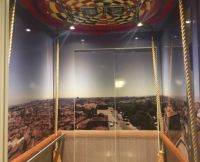 A major €8.6m restoration of Infante Sagres with its stunning Baroque architecture has now been completed. It was built in 1951 on the site of a mansion and is a listed building. It contains a wealth of decorative features including exquisite ironwork, carved wood detail and magnificent stained-glass panels from the workshop of Ricardo Leone of Lisbon.

Keeping to the introductory football theme, the hotel is named after Prince Henry the Navigator, initiator of the Age of Discovery, born in Porto, and whose mother was Philippa of Lancaster, sister of Henry IV. He could have played for England. In any event, the British connection with the city is very strong, with the Duke of Wellington revered for saving Porto from Napoleon and the original merchants from Bristol the instigators of the aforementioned wine trade, still a very important part of the Douro Valley commercial success. The other two major factors in the economy are the fishing industry and tourism.

The Infante Sagres offers 75 rooms and 10 suites, all luxuriously appointed and individually decorated. There is a small well-secluded sundeck area and dip pool plus the Vogue Café, which has quickly established itself as the city’s chic rendezvous with some very tasty international and Portuguese cuisine at affordable prices. You can enter from the hotel or the street. 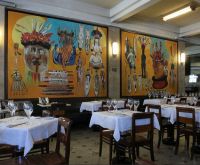 Porto is not an expensive city and one night we tried the Café Guarany, established in 1933 and famous for its décor and music, both traditional. Again, the cost was reasonable (€60 for two), with no entertainment charge. It is a steep downhill 50m walk from the hotel. We also took ourselves to the synagogue, the spiritual home of a small but thriving community. The lovely building, a mixture of Moroccan and European styles, was consecrated only in 1938. A museum telling the story of the Iberian Jews over 1,500 years is opening shortly. Visitors of all denominations are welcome but need to advise in advance.

A short walk from Infante Sagres is the São Bento central railway terminus, finally completed in 1916 although trains have run along the banks of the river from the 1880s. From here five times daily there is a leisurely service mainly along the Douro Valley to Pocinho far up the valley but we got off at Pinhoa and walked across the track to the back door of The Vintage House Hotel.

There are plans to speed up the timetable but while from time to time the views are magnificent it is worthwhile to take something to read, or an iPad, with you. It is 2½hr each way. Don’t even try to join the public bus (you need to change several times) and the alternative is by car with the chance to stop at some stunning views and small villages.

The Vintage House Hotel has been part of the Fladgate Partnership since 2016. Of the 50 rooms, all but four face the river and it was interesting to learn that all the staff are Portuguese, the more senior members much experienced in European hotel management. Paulo Santos, now in charge and previously at the Infante Sagres, explained some of the difficulties in running a 5-star property in a somewhat out-of-the-way place: You just can’t go around the corner and purchase provisions. It all has to be planned. But no problems with fresh vegetables.

A luncheon in the Rabelo Restaurant was superb and visitors are welcome. It is not quite the same in the evening.  When the hotel is full, there are just enough tables (and staff) to cover. If you plan to dine and then drive back to Porto, book in advance. The Vintage House Hotel is different from The Yeatman and has been described as “rural luxury”. There’s also a tennis court within the grounds and light meals are served all day around the large swimming pool overlooking the river.

Just a 25min walk away is another Fladgate property, the Croft flagship Quinta da Roeda, with a visitor centre housed in Roêda’s old stables, which have been carefully restored in the traditional Douro Valley style. These provide a spacious environment in which to taste Croft’s renowned ports and browse the shop for unique local products such as the estate’s own extra virgin olive oil.

To enjoy Porto, you have to enjoy wine. Whichever hotel you stay at, a glass of port will welcome you. The weather is pretty good too, not that hot in July and August and the rain keeps away during those months.

It is not surprising that since 1588 (the date Croft was founded) the Brits have been coming. And you don’t have to change your clock. The Portuguese work on British Summer Time and GMT in the winter. 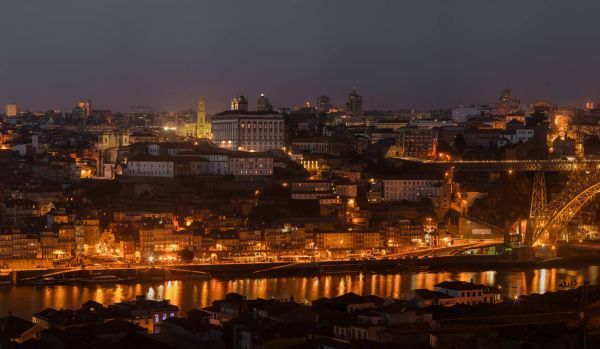