Robert Goodwill (aviation minister) will make the keynote speech at the Airport Operators Association (AOA) dinner on 1 March at London’s Grosvenor House hotel as pressure mounts on the government to confirm a date for a final decision on a new runway for the South East. 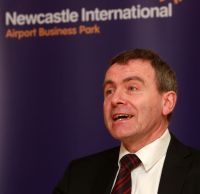 Also down to attend is Richard Burden (shadow aviation minister); Drew Hendry (SNP transport spokesperson) and Baroness Randerson (Lib Dem transport spokesperson).  Listening with a keen interest will be the chief executives of the two contending airports, John Holland-Kaye (Heathrow) and Stewart Wingate (Gatwick) while also in attendance is expected to be Andrew Haines (CEO, Civil Aviation Authority); Martin Rolfe who holds the same position at NATS; Patricia Hayes in charge of aviation at the DfT and Sir Charles Montgomery, director general of the Border Force.

Both airports and airlines are expected among the 900 guests with the eagerly awaited minister’s speech, clearly a discussion piece both before and after its delivery.  Ed Anderson, chairman of AOA, was forthright in  BTN  last week's  ON THE SOAPBOX. “We need an end to decades of prevarication from successive Governments on addressing the capacity crunch in London and the South East.