The cruise issue for April is a multi-water borne offering.

Pride of place must go to Her Majesty The Queen who named P&O Britannia on Tuesday 10 March.

We have balanced up the deep sea part of cruising with CRUISE INTELLIGENCE taking a look at what is on offer regarding river trips.

Also with a water borne theme is  ON TOUR featuring our former  Reuters  man John Burke taking a look at the Newhaven – Dieppe short sea crossing, under serious withdrawal possibilities. 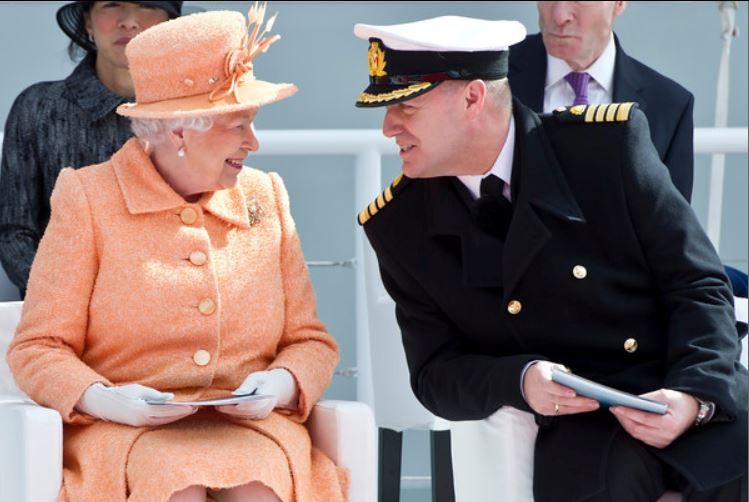 Britannia is not a new name for P&O.  The previous ship of that title was one of the outstanding vessels of its time, tiny by today’s standards (6,000 tons) but good enough to take the young Winston Churchill to India in 1888.

It is well known that Her Majesty was not amused when Tony Blair decommissioned the former Royal Yacht, but judging by her demeanour at the naming ceremony that was all behind her.  Prince Philip also was in great form.  He clearly loves the opportunity to be involved with the sea.  Last year he was the Guest of Honour at a ceremony to celebrate 10 years of Queen Mary 2.  Also on hand was Carnival Chairman Micky Arison, seemingly a regular at these Royal occasions.

The naming ceremony was a very well organised event in the best British tradition with actor/comedian Rob Brydon presiding (he also hosted an ‘on board’ cocktail party the previous night) with the bands of the Royal Marines, the Irish Guards, The Red Hot Chilli Pipers and dancers from Strictly Come Dancing.  The traditional vino was smashed, a Nebuchadnezzar (20 bottles) of English sparkling wine from the Wiston Estate Winery near Pulborough, Sussex.

All in front of a 1,100-strong audience seated in a covered stand.

The weather was wonderful and the atmosphere terrific.  A world wide audience watched the ceremony, broadcast by most international news channels. 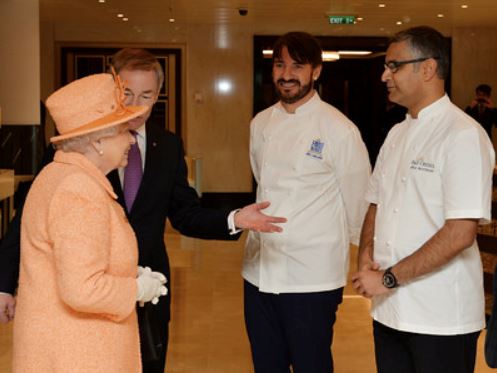 The extensive children's facilities include four age group areas, a night nursery and outdoor splash area for teens (and if Ventura is anything to go by very popular with a staff of 36 during the peak holiday periods).  Free of charge are cooking classes for children.  Adults can attend the Chefs Table, hosted by the line’s ‘Food Heroes’.  But if you want to be taught by Marco Pierre White, James Martin or Atul Kochhar (to name but a few) they could be on your voyage.  However that will cost.  As will drinking with Ollie Smith. 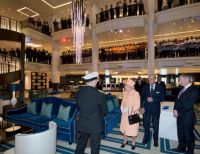 Britannia boosts P&O Cruises capacity by 24% and joins the small band of cruise liners that are over 1,000 feet long.  It is the largest ship ever designed for the British holiday market.  This summer she is based out of Southampton taking a series of trips from two nights (a quick excursion to Guernsey – maybe just to try out the ship’s tenders), to 15 days.  There is an Atlantic crossing in late October followed by a sojourn in the Caribbean.  She returns to the UK in March 2016.

Business Travel News  spent an exciting 24 hours on the new ship, far too short a time to find one’s way around, but at least a taster.  We never did get as far as the Oasis Spa and it was not the sort of day to try one of the swimming pools. On Britannia the casino is situated in Brodies bar on Tween deck, deck 6, but both that facility and the shops were closed. 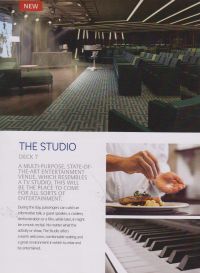 P&O produced what must be the ultimate press notepad, 100 pages in colour with just about everything you needed to know regarding the ship.  The Headliners Theatre (890 seats) is both technically and from a viewing aspect better than anything in London’s West End, and if the short introductory programme is anything to go by, at least it is equal for entertainment.  And it is free, or if you prefer, part of the holiday hospitality package.

David Dingle, Chairman of Carnival UK, hosted a lively on-board press conference on the evening before the ceremony with a beaming Mickey Ariston in the audience.

Asked about Royal Caribbean’s Anthem of the Seas, slightly bigger and much more flamboyant it would seem in the American style, his retort was straight forward.  “We are pushing towards two million ex-UK cruise passengers in a single year.  Ours is a different product and there is plenty of room for both ships.”

Anthem will be named later this month, also at Southampton.  The ‘trade’ guest list will be similar but there will be two differences in the event.  Clearly the Queen cannot name an American ship (Britannia is registered at Southampton) and instead of erecting a grandstand RCCL is taking its guests for a two-night trip in the English Channel.  The long range weather forecast looks promising.  BTN  will report.

In the meantime ‘Rule Britannia’.  www.pocruises.com

River cruising is a completely different product to the deep sea variety and should be treated rather like a car expedition with someone else doing the driving, or a coach tour.  The real big adjustment is that you don’t change your accommodation every night and at the most, certainly in Europe, you will be joining not more than around 200 people.  Compared to the ocean-going liners the cabins are generally smaller and the catering, due to space considerations, more limited.  Wi-fi is usually free and some boats even have small swimming pools.

The atmosphere on board is very congenital with the cruise director often doubling up as the port lecturer, usually assisted by specialists at each town/city visited.  The Danube and Rhine are the most popular rivers in Europe, St Petersburg to Moscow on the Volga fascinating and other waterways include the Douro (Portugal) and Rhone (France).

The larger river cruise operators such as Emerald, Scenic and Viking have their own dedicated all year round fleets.  Others charter in a boat for the summer season and brand it in their name.  John Ward, doyen of the cruise review business, has published “River Cruising in Europe”.  www.insightguides.com/berlitz

APRIL 30:  Save £280 per person on a seven-day Holland & The Romantic Rhine Valley cruise from Amsterdam to Strasbourg.  The cruise, onboard the MS La Boheme, departs Amsterdam and visits Cologne, Rudesheim, Heidelberg and Mannheim.  Cruise only prices from £615 per person (previously £895 per person) for accommodation in an outside cabin with all onboard meals, complimentary beer and wine at lunch and dinner as well as open bar throughout the voyage (not including Champagne, special wines or fine brandies), entertainment, briefings and port taxes.  Travel from the UK is not included, nor airport transfers.  The ship essentially caters for French speakers.   www.croisieurope.co.uk


MAY 6: Enjoy a luxury seven-night Tulip Time cruise on board the award-winning  AmaSonata, including first class rail travel and saving up to £600pp.  Embark from St Pancras to Amsterdam, via Brussels, and board the elegant five-star cruise ship, for a trip along the Dutch and Belgian waterways.  Admire the spectacular tulip carpets in Keukenhof Gardens and visit the great medieval cities of Antwerp and Ghent while sailing through the lush green countryside of Kinderdijk, home to the country’s greatest concentration of windmills.  Prices start from £1,395 per person (two sharing) including all meals on board, wine, beer or soft drinks with lunch and dinner, guided excursions, plus Standard Premier service on Eurostar, and private transfers.   www.planetrail.co.uk

MAY 19:  Cruise Portugal’s Douro has a seven-night round-trip cruise from Porto along the Douro valley for £1,999pp, saving £4,45pp (was £2,439pp).  The offer includes return UK flights, transfers, breakfast, lunch and dinner with wine, beer and soft drinks, complimentary daily excursions and free wi-fi.  Begin in Porto and continue on to the ancient and picturesque city of Lamego.  Enter Spain to visit Salamanca, a UNESCO World Heritage Site, as well as the beautiful inland countryside and the palace and gardens of Mateus.  Explore the Alpendurada Monastery before concluding your cruise in Porto.   www.amawaterways.co.uk


MAY 31:  Something completely different.  The eight-passenger Rosa barge on the Canal de la Garonne in SW France for seven nights from Agen to Montauban.  The highlights include crossing a 1,000 ft aqueduct; wine and Armagnac tastings; visits to chateaux and medieval towns such as Nerac.  Fully inclusive of gourmet meals, fine wines, open bar, excursions, transfers from (and return to) the designated meeting point in Toulouse.  Flights not included.  Normal price £2,820pp. 20% off price £2,256pp.   www.gobarging.com

JUNE 1:  Amsterdam – Nuremburg on Scenic Jade is up-market with an irresistible selection of on-board dining venues available during the cruise including Portobellos Restaurant, the Crystal Dining Restaurant, River Café, the Riverview Terrace, and an exclusive invitation to Table La Rive for Diamond Deck, Royal and Junior Suite guests.  There are unlimited complimentary drinks for everyone and no service charges.  Prices start at £1,145 and also includes a personal butler service for every guest, irrespective of cabin grade.  This cruise embraces an incredible array of spectacular experiences including a fabulous onshore dining experience in magnificent Marksburg Castle.   www.scenictours.co.uk

JULY 28: Emerald is a new, 2014, addition to the long established Scenic product, without the bells and whistles, but still of a very high quality, and well received by the cruise market travel trade.  All new ships including swimming pools that become cinemas in the evening.  “Enchantment of Eastern” is an enchanting experience, showcasing the best of what this very different area of the Continent has to offer.  Bucharest to Budapest visiting destinations rich in Ottoman, Byzantine and Tsarist history.  From £2,021.     www.emeraldwaterways.co.uk


Please note that we emailed all the river cruise companies known to us for their latest deals and updates.  Only the above operators replied, a great pity but it does include some really fine river operators.