While most attention has been drawn to its proposed takeover by IAG, Aer Lingus reported an 18% increase in annual profits before exceptional items, rising to €72m from €61m on strong long haul performance.  Revenue rose by 9.2%.  The Aer Lingus Board is proposing to pay an increased dividend of 5 cents per share for 2014, up from 4 cents for the year 2013, unlike IAG shareholders who have received nothing to date.

Aer Lingus is also pressing ahead with an upgraded Business Class with its eight Airbus A330s used on the North Atlantic.  Displayed at the Business Travel Show, and not as extravagant as some of the Gulf carrier's offerings the seats are very practical with plenty of storage room, 2 metre lie flat seats which include a 16” HD multi-touch IFE screen in the module.  There is a shoe stowing space, seat massage and the dining is described as ‘traditional and modern Irish’.

Passengers clear the US Customs and Protection service in Dublin saving the ‘sometimes’ big queues at the other end. 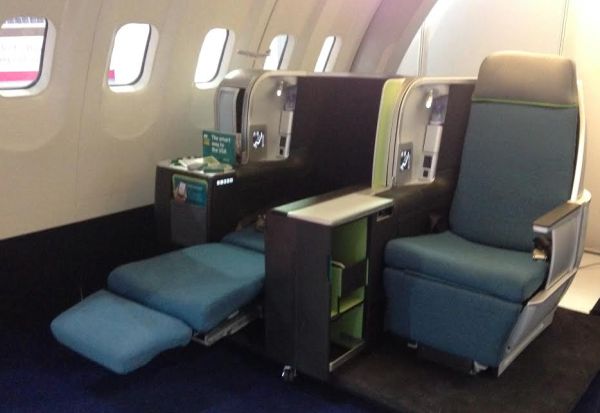