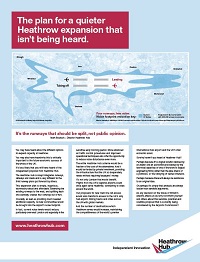 Readers of national titles interested in travel, and also the environment, were surprised to see an advert promoting what it termed “The plan for a quieter Heathrow expansion that isn’t being heard”.

It is in fact a scheme, called “Heathrow Hub” being promoted by Captain Jock Lowe, the former British Airways Concorde Fleet Captain (and a member of the airline’s Executive Board) which Business Travel News featured earlier in the year (see BTN 29 April).  Captain Lowe had joined up with Mark Bostock, a former Director at the engineers Arup, who has developed a plan for a new railway station at Heathrow that could also serve as an airport terminal.

The advertisement appeared in The Sunday Times, The Times, Telegraph, City A.M. and Evening Standard.  BTN estimates the cost at around £100,000.

The scheme is being supported by Ian Hannan the former Chairman of global capital markets at JP Morgan.  In simple terms the idea is to double the length of each runway across the M25, enabling the airport to substantially increase capacity.  Safety and air traffic requirements are said to be taken care of.  Mr Hannam has bought stakes in Runway Innovations Ltd and Heathrow Hub Ltd, the two companies behind the Heathrow Hub proposal.  www.heathrowairport.com