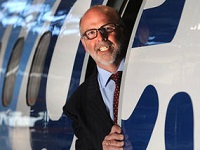 The master conjurer, Jim French, has stepped down as Chairman of Flybe after failing to pull off the ultimate trick of turning a privately owned airline into a high flyer on the London Stock Market.

In a 23-year stint at the Exeter-based airline, he helped turn the then Jersey European Airlines into one of Europe’s leading regional carriers.  But one crisis seemed to follow another, with the airline always surviving.

His initial enthusiasm for the Bombardier regional jet turned sour but he was able to swap his fleet with the same manufacturer for the much more economical Q400 series turboprop.  At Gatwick he grabbed the rump of City Flyer Express, a BA owned competitor and benefitted with a compensation pay-out when BAE cancelled the Avro RJX.  Embraer came knocking at the door and Flybe became the first operator of the EMB 195.  Loganair rebranded as Flybe adding 55 routes to the network and Flybe Nordic became a joint Finnair operation.

Jim French gained a CBE in 2009 but he is not appreciated in Plymouth where his decision to fly direct from Gatwick to Newquay precipitated the then Air South West to discontinue its Gatwick route and consequently the closure of Plymouth Airport.  French’s final act was to drop Flybe’s Newquay operation, leaving Cornwall with no links to London. (see Flybe results) www.flybe.com