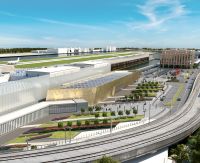 London City Airport (LCY) has submitted a planning application for permission to expand its current infrastructure to accommodate up to 120,000 flight movements (take offs and landings) per year, a level already permitted under an application granted in 2009.

The proposals will also allow the airport to double its passenger numbers to 6m over the next 10 years, while continuing to attract inward investment into east London and acting as a catalyst for the regeneration of the area.  No mention in the application of increased access possibilities if a Crossrail station were to be added locally.

The timing of the announcement is significant in that it coincides with the first flight of the Bombardier CSeries jet (see in this weeks issue), designed for the airport but substantially (up to 146 passengers) larger than the current operational aircraft.

The £200m expansion scheme includes new aircraft parking stands – to accommodate larger aircraft – a parallel taxi track to optimise runway capacity in peak operating hours and a major terminal extension to ensure that LCY’s convenience and speed-of-transit propositions are maintained.  Crucially, the airport is not proposing a second runway, or any extension to the existing runway. www.londoncityairport.com