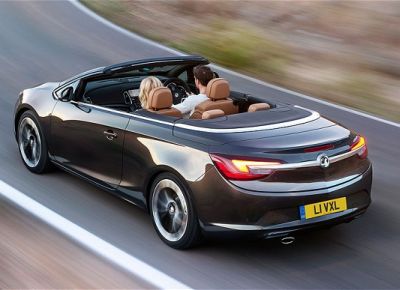 Vauxhall (and its European associate Opel) has recently been going to town with the creation of some very significant new models which have justifiably attracted some strong sales – Astra, Adam, Zafira, Insignia to name a few.

I must confess I have found the arrival of the Vauxhall Cascada four-seat Cabriolet model an exciting development, dare I say, a real breath of fresh air, particularly to UK buyers where drop top cars have long been hugely popular.

So much so that buyers have invariably put up with obvious sacrifices just to snatch the chance at open top motoring – by that I mean cramped seating, less rigid body construction, greater noise and challenging weather protection.

Clearly the Vauxhall team started with a clean sheet of paper and an independent model name rather than latching on to, say, the Astra title, thus creating greater kudos from the outset.

They have also stuck to a powered soft top rather than the extra weight and a greater complication of a folding metal roof,  but I have to admit that it is very good and is easy to operate – you can actually close it with the the remote on the key fob.

Where the Cascada really scores is on four-seat comfort.  With the top erected there is genuine comfort in the rear two seats for adult-sized occupants who should find head and leg space sufficiently generous.

Obviously, the folded soft top impinges on the boot area and to operate the system a fold down protective flap has to be manually operated to indicate the load limits.  However, I found that once the roof was stowed additional items can be introduced below this flap thus making it a reasonably practical vehicle.  Boot aperture is smallish.

Driver comfort is also a very strong factor, the manually adjustable sports type seat has considerable adjustment scope and is very well contoured, the steering column reach and rake adjustable.  The pedals’ position is well spaced and comfortable regardless of driver shoe size.  The vision with the roof erected is reasonable and aided by standard fit rear parking sensors.  Front sensors are and extra.

Fascia presentation is stylish, of good quality materials and with comprehensive information (average fuel consumption, distance to empty etc) plus both an analogue and digital speed readings.  The short throw gear lever has a comfortable knob, perhaps modelled on a golf club head and the parking brake is an easy use electro/automatic device.

Interior trim is a smart act, the materials of good quality, this car having cloth upholstery (some other models in the range having perforated leather), a leather covered steering wheel and colour contrasting interior trim.

Visually the Cascada is an eye-catcher, a car of substance and relatively long for a cabriolet and it is hard to comprehend that the car employs a 1.4-litre power unit.  Yes, engine development has moved on rapidly in recent times and Vauxhall is at the forefront of the technology with high efficiency, small capacity engines.

This petrol turbo unit delivers 140 ps (138 bhp) at a wide rev range to provide a claimed top speed of 139mph and 0 to 60mph acceleration in 1 respectable 10.2 seconds.  It certainly has that get-up-and-go turn of performance that ensures some fun and also a good cruising ability via a clean changing six-speed manual gearbox with ideally chosen ratios.

Watching the average fuel consumption readout on the information panel can show some variable figures from this very willing engine and it pays to practice some ‘feather footing’ to return some attractive consumption figures – the official combined consumption is 44.8mpg that, given a touch of careful driving, I suggest, could be bettered but even around this figure the accolade of gas guzzler should not apply.  A stop+start system obviously aids economy around town as well as obviating some of the emissions which are rated at 148 g/km.

The Cascada has been designed essentially as a pleasure car and I found nothing better than cruising with top down, the rakish windscreen providing good wind protection though rear occupants would not benefit to the same extent.  What is notable is the low noise levels even with the roof folded.

That pleasure also extends to the driving character that has been created by a rigid no shake body, a sports orientated fully independent suspension system, powerful all disc braking, light but positive steering and a light and smooth operating clutch control.  Ride comfort is notable. This is real motoring!

The Cascada range also includes a 1.6 turbo petrol engine and three diesel units in various outputs plus a couple of automatic transmission variants.

After an extensive test session with the Cascada I feel that Vauxhall has gone the extra mile (the easy fold roof comes from a major supplier to a top German car brand) and has delivered a car that is an instant winner.  Bravo! 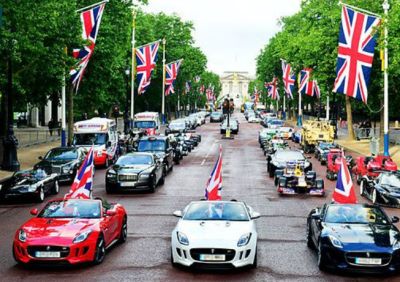 Readers interested in a motoring inspired day out during the summer holidays might like to consider the Coventry Motor Museum (see ON TOUR)), Brooklands which has a full programme over the coming weeks and of course Gaydon with its amazing car collection and unique Nuffield history.  Viewers of the current Top Gear series would have seen the magnificent turnout in The Mall of the current (and past) British motor transport manufacturing scene. Episode 6. www.bbc.co.uk/iplayer


THE SOCIETY OF MOTOR MANUFACTURERS AND TRADERS (SMMT) has published the July car sales figures which showed a rise for the 17th successive month growing 12.7% to 162,228 units.  Diesel and petrol cars more than held place but registrations of alternatively-fuelled vehicles grew 17% in the month to 2,432 and hit 17,859 units for the January to July period.  Plug-in car registrations have risen 70.7% over the first seven months of 2013, to 1,885 units.

"Strong business and consumer confidence in July saw the new car market continue to rise, posting double-digit growth in the month.  Now we have evidence of consistent growth, we have raised our forecast for 2013 new car registrations to 2.216 million units, an increase of over 8% on last year", said Mike Baunton, SMMT Interim Chief Executive.  "Recently, we've seen a range of economic indicators point to improving conditions and our raised sales forecast emphasises how positively we view the rest of 2013". www.smmt.co.uk

The year to date figures are an indication of how the various marques are doing:

FORD has received double the expected number of orders for the award-winning Ford Fiesta ST in its first six months on sale, with almost one third of all orders placed across Europe coming from the UK.  More than 3,000 Fiesta ST orders have been placed in the UK since it went on sale at the end of March, a sales rate well ahead of the projected 5,000-per-year target.  Europe-wide demand is being led by UK customers, making up 56% of all dealer reservations across the continent.  As a result, Fiesta ST production will increase by 15% to 60 vehicles per day to keep up with growing demand.  The Ford Fiesta ST offers performance-tuned steering, suspension, brakes and enhanced Torque Vectoring Control; as well as Ford MyKey, SYNC with Emergency Assistance and Recaro sports seats.  Powered by a 180bhp, 1.6-litre EcoBoost petrol engine, the Fiesta ST is capable of 0-62mph in 6.9 seconds and has a top speed of 139mph. www.ford.co.uk

JAGUAR is to sell ten sell track-prepared, road ready XKR-S GT to UK customers at £135,000 each – a new record for a road legal Jaguar car.  Since its debut presentation in New York, a prototype version of the Jaguar XKR-S GT has been undertaking rigorous test programmes on road and track in the UK and Germany.  Supported by a team from Jaguar’s Engineered To Order (ETO) division, the XKR-S GT recently completed a lap of the famous Nürburgring Nordschleife circuit in a remarkable 7mins 40secs.  The car does 60mph in 3.9secs with an electronically limited top speed of 186mph. www.jaguar.co.uk

LOTUS the iconic British car manufacturer has announced that it is to create more than 100 new jobs, including a new intake to its revamped graduate programme.  The firm will recruit 45 specialist engineers and 40 manufacturing operatives, along with 18 graduates.  Lotus currently employs around 1,000 staff at its Hethel, Norfolk headquarters.  The recruitment drive follows a £100m investment by Malaysian owners DRB-HICOM, enabling the company to strengthen its engineering, productivity, efficiency and quality.  Both the engineering specialists and graduates will work on the development of new products within Lotus Engineering, one of the most renowned automotive engineering facilities in the world. Lotus has created the new positions in response to increased global demand for its sports cars and an anticipated rise in interest in its engineering consultancy services.  The firm is also focusing on growing into new global markets as currently around 90% of all Lotus vehicles are exported. (See also BTN 13 May)  www.lotuscars.com

NISSAN AND ECOTRICITY are expanding their electrifying partnership to grow the UK charging infrastructure.  New rapid chargers are being rolled-out at 13 Welcome Break service stations representing the latest phase of work completed by Nissan and Ecotricity to expand the rapid charging network on the UK’s motorways.  The new additions mean the total number of rapid chargers in the UK is now 97 with plans to install at the majority of Welcome Break sites by April 2014.  The chargers form the UK’s first publicly accessible rapid charging network on the motorways and are capable of ‘refuelling’ an all-electric Nissan LEAF from 0% to 80% battery capacity in just 30mins.  Safe in the knowledge that there are Welcome Break service stations up and down the country equipped with rapid charging technology, EV users can now explore opportunities to take longer journeys using the UK’s motorway system. www.nissan.co.uk  www.ecotricity.co.uk