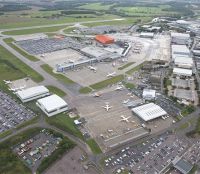 Last week BTN reported that Luton Airport, north of London, had not been part of the airports’ sale by Spanish infrastructure group Abertis.  Seven days later and things have moved on.

Aena, the Spanish airport company, which already owns 10% of Luton, is exercising the right of first refusal to buy the stake held by Abertis.  In making the purchase it has teamed with AXA Private Equity, with Aena holding a 51% share and AXA Private Equity 49%.

Luton is the first non-Spanish airport that Aena will control.  The company handles nearly 200m passengers a year across 47 airports in Spain.

Luton is the UK’s fifth largest airport by passenger numbers.  It is Britain’s busiest executive jet operation due to its closeness to Central London and 24/7 availability.  From an airline passenger point of view Luton usually works OK but it suffers from a utility experience and an illogical layout.  It lags well behind Gatwick, Heathrow and now Stansted which are in receipt of considerable investment.  A development programme awaits formal planning permission and the airport will benefit from major rail improvements under way for train services between Luton Parkway and St Pancras.  Aena will manage the airport under a 30-year lease from freeholder Luton Borough Council. www.london-luton.co.uk