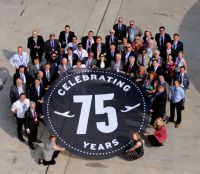 Abertis, the Spanish infrastructure group, has confirmed the sale of the bulk of its airport assets in Europe and the US to ADC & HAS Airports Worldwide for US$284m.  The sale includes Belfast International and Stockholm Skavsta airports, as well as the Orlando Sanford airport terminal concessions.

However Luton Airport, north London, is not included.

Regarding Luton, Abertis signed a long-term contract in September 2012 with the freeholder, Luton Borough Council, which called for a substantial revamp of the airport.  This is still in the planning process.  As London’s fourth busiest airport, and with its proximity to both the M1 and A1/M motorways and the London – East Midlands rail line, Luton is very likely to feature in the deliberations of the Government’s Airports Commission, and its initial announcement at the end of this year.  On 16 July the airport celebrated its 75th anniversary.