Virgin and Delta get closer 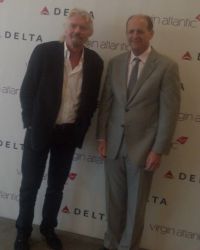 The US$360m sale by Singapore Airlines to Delta Airlines (DL) of its 49% interest in Virgin Atlantic (VS) is getting closer with total completion expected third quarter 2013 (see BTN 10 December 2012).

In the meantime DL and VS are pushing ahead with plans for a joint summer North Atlantic programme next year, Richard Anderson, Delta’s Chief Executive Officer said in New York last week at a JFK T4 media briefing.  Asked by BTN regarding a return to Gatwick (the airline moved across to Heathrow following ‘Open Skies’ in 2008) he certainly did not rule it out saying that "all options" were open with the joint Virgin Atlantic partnership 2014.

Perry Canturatti, VP Europe, gave a more detailed presentation noting that London – New York represents three times the Paris – New York market and a much higher premium class traffic proportion.  With Virgin Atlantic the partnership will represent 23 round trips daily out of Heathrow and 25% seat share.  Whilst there is nothing definite planned for Delta, Heathrow is a very much a point to point airport rather than connecting such as Amsterdam and Paris.  With this in mind, and dependent on how Heathrow Airport Ltd sorts things out, Delta could easily move from T4 to the central area and into the “much praised” Virgin facility. www.delta.com