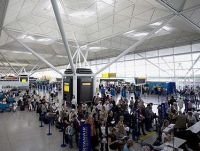 Manchester Airports Group (MAG) is the new operator of Stansted Airport after its successful £1.5bn bid was completed last week.  In the short term it intends to re-configure both the extensive landside area (making it smaller) and enlarging the airside shopping facilities. The cost is put at £50m.

MAG does have serious problems in that its largest client, Ryanair, says that it is going to reduce its operations by 9% (see Ryanair saga continues), and also finds Southend Airport nibbling away at its numbers.  On the plus side, with the exception of the self-imposed terminal revamp, no large investment will be required for some years.  Other than attracting more airlines to the airport Stansted’s biggest problem is the Stansted Express (Stansted Slow!) which stops at least twice on its 45-minute journey to London’s Liverpool Street station, ideally placed for the City.  A 30-minute target figure is planned.

At the present time Stansted is running at half its capacity and could, with its land bank, add a second runway if the Davies Commission finds in favour.  The Mayor of London, Boris Johnson, seems to have mixed views on the airport, but would probably support expansion if that was the Davies recommendation. www.stanstedairport.com