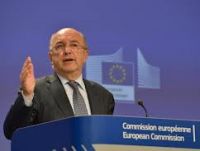 EU antitrust regulators have now blocked Ryanair's third attempt to acquire Irish rival Aer Lingus, a ruling Europe's biggest low-cost airline called politically motivated and vowed to challenge in court.  Whether this is just a ploy to destabilise its much smaller rival, which it partially owns, or a serious move by CEO Michael O’Leary is hard to gauge.  For the various rulings to be overturned would be unprecedented.

"For (Irish and European) passengers the acquisition of Aer Lingus by Ryanair would have most likely led to higher fares", EU Competition Commissioner Joaquin Almunia said in a statement.

"Those proposals (from Ryanair) were simply inadequate to solve the very serious competition problems which this acquisition would have created on no less than 46 routes (which they compete on)",  he said.

The EU antitrust authority said Ryanair's deals to divest some of Aer Lingus' routes to Flybe and British Airways would not have ensured sufficient competition.

Ryanair rejected the Commission's arguments, saying it had proposed an unprecedented package of concessions to allay regulatory concerns.  If the appeal goes ahead will Ryanair yield more?

In another outburst, on the day the Stansted sale completed, the airline announced a 9% reduction of flights at the airport for 2013. www.ryanair.co  http://europa.eu