This month’s ship review: Independence of the Sea – with children in mind 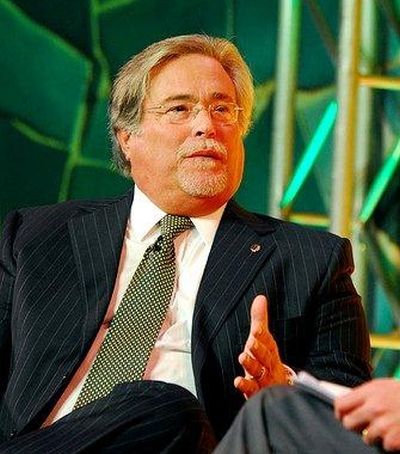 Micky Arison, Carnival Corporation Chairman and the biggest name in the world of cruising, will make a rare public appearance at World Travel Market (WTM) on Tuesday 6 November via video link from Miami. (15:00 in Platinum Suites 3 and 4).

Last year the cruise sector featured for the first time, and Travel Weekly’s session with Royal Caribbean Cruises Chairman, Richard Fain. was certainly one of the highlights.

WTM comes at the end of a tumultuous year for the cruise sector and particularly Carnival’s Costa Cruises after Concordia ran aground in January, killing 32.

Arison has been Chief Executive of the Carnival Corporation since 1979 and its Chairman since 1990, he will have plenty of insights when he discusses the industry with session moderator Travel Weekly Group UK Editor-in-Chief Lucy Huxley.  Carnival includes ships with its own brand name, plus Cunard, Holland America, Ibero (Spain) P&O, Princess and Seabourn, and the two already mentioned.  In total over 100 ships.

Arison will be joined actually live on stage in the debate by Carnival UK Managing Director David Dingle who will not only draw upon his extensive experience from working in the cruise industry but also from the wider perspective of the industry he gained on the ABTA board.  A speaker is Costa Cruises and AIDA Managing Director Michael Thamm who as early as 1993 was holding senior positions in the cruise industry.

The tragedy of the Costa Concordia is bound to be one subject discussed and how it was dealt with, and the lessons learnt (See BTN http://www.btnews.co.uk/article/4651.  The industry has also dealt with fluctuating oil prices but despite this has remained strong with growing numbers of customers and a number of new ships commissioned.

Independence of the Sea – with children in mind 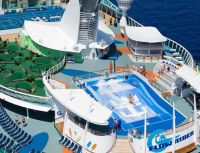 Independence of the Sea can only be described as a mighty ship and a floating holiday resort.  After a successful season based at Southampton she is shortly off to Ft Lauderdale and into the Caribbean for a long series of weekly trips into the eastern and western islands.  She returns mid-April with a voyage popular for people who like long relaxing days at sea.  The prices for Atlantic crossings are usually very competitive.

Business Travel News took a look at “Independence” back in February 2011, but this review is for those who are considering taking their children (or grandchildren) on holiday. 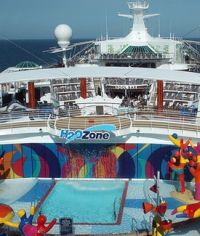 For a family there are large suites and connecting staterooms, a huge variety.

This review concentres on the young peoples facilities but we must mention one particular area they are not allowed into, the 16-person capacity hot tubs cantilevered out on each side of the ship on deck 11.  Also it seems that some Health & Safety spoilsport stopped these from being manufactured from transparent material.  The view down to the sea would have been spectacular.

The ‘Adventure Ocean Youth Programme’ has been designed specifically for children off all ages.  It is pretty comprehensive and need not cost you a penny extra.

• Navigators (12-14 years) – Join activities and games or just chill out with new friends.

• Guests (15-17 years) – Options to join in events, get away from it all and hang out or party in Fuel, the teen-only nightclub.

• Royal Babies and Tots nursery – a fully-staffed nursery where children can be left in the care of Royal Caribbean International’s trained professionals.  It offers parents childcare drop-off options in the daytime and evening.

Other Family activities include
• AquaTheater – with theatrical diving performances and spectacular water and light shows.

• Vitality at Sea – specialised spa for kids and teens to enjoy their own dedicated treatments – Mother and daughter and father and son spa treatments.

• The Kid’s Arcade for video games; a fully equipped lab for Adventure Science Lab, where Einsteins-in-the-making can expand their knowledge; and Adventure Ocean Theater, the first-ever children’s theatre at sea – complete with a stage and curtains, audience seating and state-of-the-art production equipment – where children of all ages can learn about theatrical productions, take part in talent shows, or sign up for hip hop dance classes. www.royalcaribbean.co.uk

Disney Cruise Line is returning to the Mediterranean in 2013 with a series of four- and seven-night cruises out of Barcelona from June next year with Disney Magic, at 83,000 tons, about the same as the first Cunard Queen Elizabeth and with two funnels also.  It is designed as a fun ship with virtually all cabins able to double up with accommodation.  Adults are welcome too and certain areas are banned for younger elements.  It is a quality product and if you want something quieter the Palo dining room has a US$5 cover charge and no kids. www.disneycruise.disney.go.com

Voyages of Discovery is readying its recently acquired 15,000 ton Voyager prior to a winters programme that takes in the Caribbean and South America.  Prior to joining the fleet the 540-passenger ship will undertake its final month-long refurbishment in Portland Port (UK) before sailing to its home port of Portsmouth for its inaugural cruise to Barbados on 4 December.  If Minerva, part of sister company Swan is anything to go by the new Voyager should offer tremendous value from £56 per day.  She has 30 balcony cabins. We hope to run a preview next month www.voyagesofdiscovery.co.uk

Hebridean Island Cruises is to again offer a dedicated 2013 European Rivers Programme.  Colin Stone, Managing Director at Hebridean Island Cruises, commented: “This year’s Hebridean river programme has been an incredible success; it gave us the opportunity to offer our loyal guests something different on a par with the luxury experience commonly associated with Hebridean Princess.  Following on from the four dedicated charters in 2012 we have slightly expanded the forthcoming programme and we are confident that the 2013 sailings will be greatly received by existing guests and those looking to try river cruising for the first time”. www.hebridean.co.uk

Saga Sapphire, in its previous life the highly rated Europa, and with Saga only since earlier this year, has a 35-night cruise from Southampton on 21 January to the Caribbean and back.  It really is a fine way to escape the worst of the British winter and whilst prices start at £5,503 there really is nothing else to pay depending on your drinking habits.  Routing is via the Canaries southbound as far as Margarita Island, virtually South America, and back via the Azores and Lisbon. http://travel.saga.co.uk

Silversea has acquired a second small-sized expedition ship, currently sailing as the Galapagos Explorer II.  Renamed Silver Galapagos it is being brought up to the high standards of the similar size Silver Explorer and will begin operating in late September 2013, sailing Saturday to Saturday on a round-trip voyage from Baltra Island.  Silver Galapagos will be the only luxury expedition ship offering socially and environmentally responsible ecotourism to the Galapagos archipelago, a UNESCO World Heritage Site.  This important distinction enables Silversea to broaden its portfolio of expedition cruises tailored to tap into the rising interest in green tourism. www.silversea.com

Swan Hellenic’s Minerva is spending the winter meandering around the Far East and with it offering some really interesting destinations.  Prices includes return flights from a major London airport and relevant transfers, a tailor-made programme of shore excursions, talks by eminent Guest Speakers, meals and entertainment on-board, all gratuities and all relevant cruise taxes/fees.  Highlights include an in-depth exploration of Vietnam with the chance to join a local boat sailing the limestone coast of Halong Bay, a visit to the royal Phnom Penh (Cambodia) and transit through the iconic Saigon River.  The 21-day Kingdoms of South East Asia cruise is available from £4,340 per person, departs 24 January, from Hong Kong to Singapore. www.swanhellenic.com