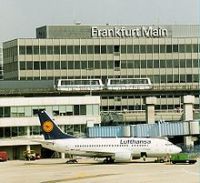 The recent night time ban at Frankfurt has resulted in a lack of slots at that airport with the consequence that Lufthansa’s winter service to Cape Town will be moved to Munich.

In a somewhat terse statement Lufthansa says that the night flight ban in Frankfurt has been “restrictively implemented” in the current summer flight schedule.

Lufthansa has already reduced departures from the airport during evening hours or advanced them to earlier hours.  It says the move is in the interests of increased flight operation reliability and stability.

Cape Town will be served from Munich five times a week with a three-class Airbus A340-300.  Flight time is slightly less at 10hrs 35mins.  No other airline links Cape Town and Germany with a non-stop flight. www.frankfurt-airport.com