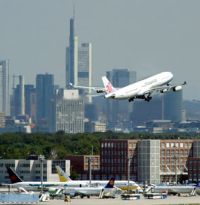 A Leipzig court on Wednesday ruled in favour of a night flight ban at Frankfurt Airport, Europe's third busiest, dealing a blow to German flagship airline Lufthansa and airport operator Fraport.  The airline says that night flights are crucial for its cargo operations and to compete with fast-growing Gulf airports.

"This is a good day for our rivals in Paris, London, Amsterdam and Dubai," airport Chief Executive Christoph Franz told the German media noting that the ban would affect Lufthansa investment decisions.

Lufthansa's cargo arm, which had a 2011 operating profit of €249m, had switched flights to Cologne during the winter but that had not worked out due to the lack of belly space in Lufthansa passenger aircraft.  Along with a total ban from 23:00 to 05:00, the Leipzig court also reduced the number of flights permitted in the period covering the so-called shoulder hours from 20:00 to 06:00 to 133 from 150.  Frankfurt will be at a distinct disadvantage to rival airports, such as London's Heathrow where 17 flights are allowed between 23:00 and 06:00, with restrictions on the type of aircraft permitted. www.fraport.de