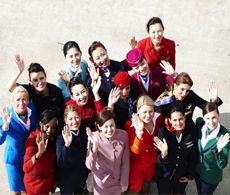 Middle East Airlines will join SkyTeam from 28 June.  Based in Beirut (Lebanon), the carrier was established way back in 1945 and has survived some tumultuous times.  Today it is majority-owned by the central bank of Lebanon, Banque du Liban, (99.50%), and flies to 31 destinations in the Middle East, Europe and West Africa.  It currently has an all Airbus fleet of four A330s and 12 A320 series.  It offers a two-class cabin on all sectors.

At their semi-annual meeting held in Beijing on 10 June, the Chief Executives of the SkyTeam member airlines confirmed Middle East Airlines’ arrival as a full member together with Aerolíneas Argentinas on 29 August as the first South American member.  Xiamen Airlines, based in the flourishing Southeast China region, will further strengthen the alliance with the official joining date set for 15 November 2012.  Saudia became the 16th member at the end of May (See issue 4 June). www.skyteam.com