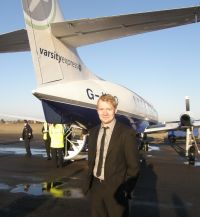 VARSITY EXPRESS, an airline serving Edinburgh from Oxford Airport, failed last Monday, probably setting a record for the shortest lifespan of a British airline, certainly in recent times (see AERBT 8 March).  A full load of 18 passengers were ready to board the carrier’s leased BAe Jetstream 31 at Edinburgh when they were given the news that they would have to find their own way south.  It appears that the aircraft owner secured his property due to non-payment of bills.  A spokesperson for Oxford Airport said that the carryings of Varsity were excellent and that they were in discussion with two carriers interested in taking over the route.  Varsity is the second airline to be founded by Martin Halstead, now 24.  In 2005 he introduced AlphaOne which lasted two months. www.flyvarsity.com