“Fantastic”. The one-word description used by Harry Sommer, soon to become president and CEO of Norwegian Cruise Line (NCL), as last week somewhere between Bremerhaven and Southampton he introduced Encore, all 167,000 tons of her, to the world’s travel trade and media. 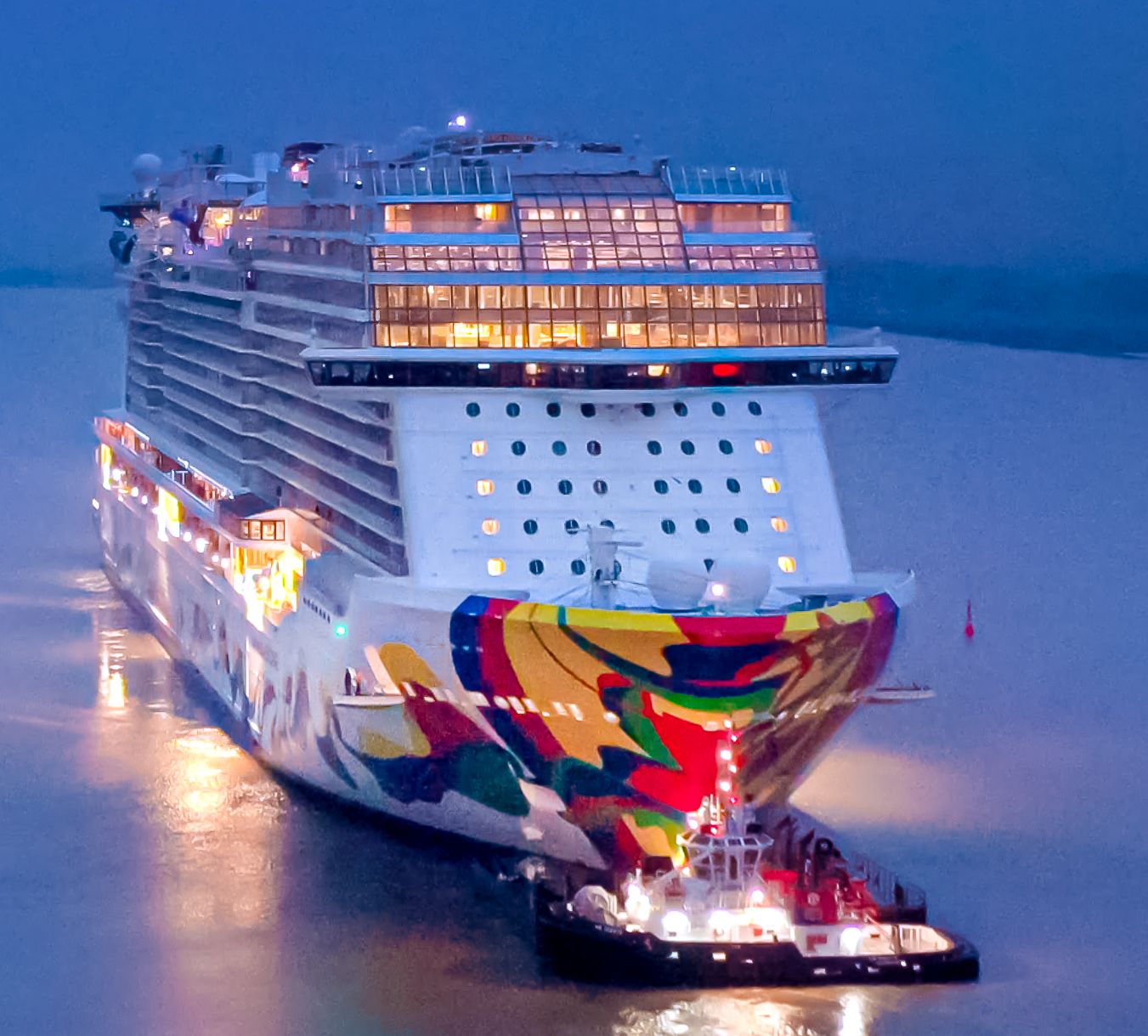 Sommer takes over shortly from Andy Stuart, 32 years with the company, who will finally step down on 31 March 2020.

As you read this piece, Encore is en-route from Southampton to New York where she will arrive on 10 November for what will undoubtedly be party time, leaving the next day for Miami and a winter programme of seven-day voyages to the Caribbean. If you have friends on board, expect to hear (and even view them via Skype etc). It has the finest wi-fi experienced at sea to date, which seems to function well on all 14 passenger decks.

Asked by BTN what his plans were for the future, Stuart said he might take a rest. “It’s a 24/7 job,” he said, “and I’ve never had a proper holiday, except for our honeymoon.”

Sommer, currently president – international for Norwegian Cruise Line Holdings Ltd said: “Andy and I have worked closely together over the past several years and I am humbled and honoured to follow in his footsteps and lead this renowned brand. I look forward to working with all of our incredible partners worldwide, building on the strong position the brand holds today and charting the strategy for the next phase of Norwegian’s journey.” 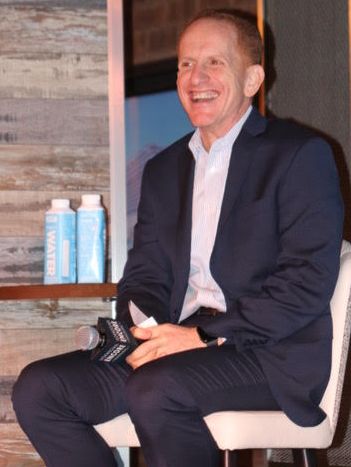 Ours was a very short trip on Encore, one half-day, one full day, and two nights. No time to take a look at the casino, spa, fitness centre or large children’s area. A quick tour was possible of the always-fast-selling Haven exclusive expanse with 52 suites, own restaurant, private pool and hot tub. The title “Haven” is perfect. The three-deck complex is another world away from the hassle and bustle of the rest of the ship. It is very private and not available to visitors. Guests have their own concierge to make priority bookings for alternative dining and activities.

Originally founded way back in 1966, Norwegian Cruise Line is now 17 ships accommodating 50,000 holiday guests every day of the year, except where inevitably one vessel might be involved in a refit. Guests are looked after by 21,000 staff from 120 countries. It is a colossal international business.

Norwegian has always been a pioneer and innovative, leading that way with the much copied “Freestyle Dining”. You don’t book, just turn up. Experience has shown it can be busy at times, so plan accordingly.

BTN once tried to call the hull artwork, now on all the NCL ships, ‘graffiti’ but the term never caught on. With Encore, this has been taken to the extreme, from bow to stern, but it looks great. Other cruise companies are once again copying.

Back in 2013, BTN took a proper cruise on NCL with a then-child in tow. The review stands the test of time, although Epic, the first of the company’s mega-ships, has since been retrofitted. There is a link within the piece to Breakaway, the leader of that four-ship class. 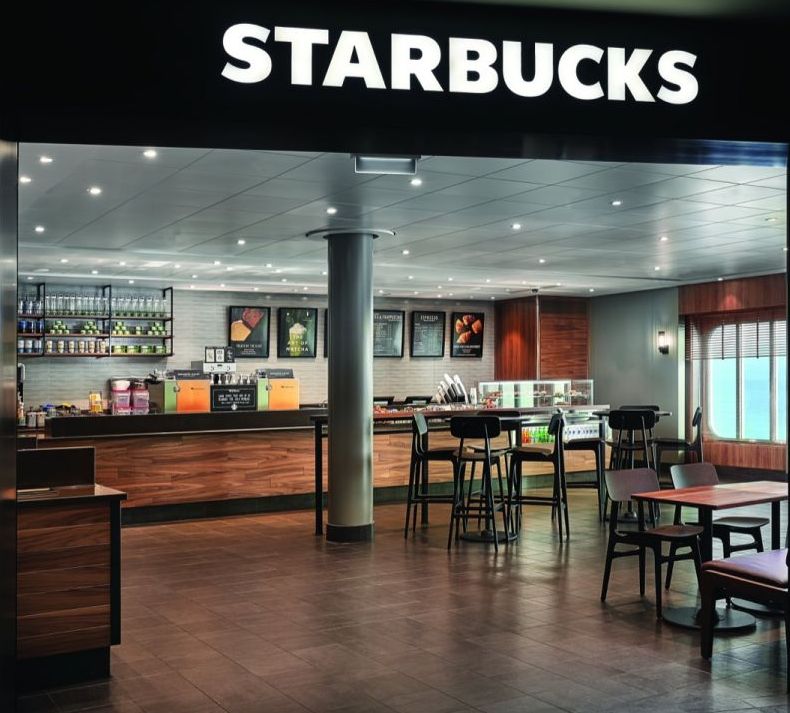 As you step on board Encore, it is very clear no expense has been spared on the ship’s interior. The styling could be termed ‘laid-back’, with contemporary artwork all around and distinctive carpeting. You get the feeling of modern luxury. NCL again uses a themed carpet of swimming fish in the two stem-to-stern main stateroom corridors to remind passengers which direction the ship is heading.

One particularly impressive artefact is the grand chandelier in the Atrium, which changes colour constantly and hangs dramatically above the glass staircase leading from deck six to deck nine. A huge video screen adorns one wall. Plenty watched the rugby, but many left early!

The stand-out attractions on Encore are the world’s longest race track at sea at 1,100ft with four high-speed curves extending up to 13ft over the side of the ship; the largest outdoor laser tag arena at nearly 10,000sq ft with the addition of augmented reality elements; and new immersive escape room and interactive theatre experiences in the 10,000sq ft Galaxy Pavilion. Motor racing is again themed with a two-seat McLaren-style race car. There is a public view screen attached. Watch your ‘friends’ make a hash of a circuit!  Soccer penalty takers can test their skills against an auto-keeper. Spurs ought to buy one!

When it comes to feasting, Encore demonstrates that standards are ever improving with fine dining in three restaurants – Manhattan, Savor and Taste, with no extra charges. In times gone by, four-course meals were offered but now the menu shows only three. Don’t worry for that extra starter course or soup. It will come if requested. Onda by Scarpetta takes Italian cooking to a new level and is well worth the extra charge. The name Scarpetta is derived from the Italian expression fare la scarpetta, which means to savour a meal to the last bite. If you have on-board credit, it is a good way of using it.

We were told there are 29 food outlets on Encore, and this does not include courtesy cabin service with a decent complimentary selection. The old-style cafeteria self-service is long gone. The informal restaurant is called the Garden Café, stylish and well laid out, with plenty of staff around to help those who find carrying the various dishes not so easy.

The evening entertainment is one of the reasons people enjoy cruise holidays so much. What is on offer is up to West End standard and ranges in the main theatre from the Tony Award-winning musical Kinky Boots to The Choir of Man, a pub-themed musical with a message. “Locals” are closing at the rate of one every 12min and this nine-man Irish group are on stage for an hour entertaining with a mixture of popular song, dance and aerial tricks. There is live piano, guitar, drum set and audience participation. The boys are all talented musicians, multi-tasking on the various instruments.

In the Cavern Club, a group called The Liverpool Beatles belt out some familiar tunes from Merseyside. On another cruise, you will catch Prohibition: The Musical, a show not familiar to British audiences. At the “Q” Texas Smokehouse, you can dine and be entertained by a fine country and western group, Camille Rae and the RaeBans. They were on twice nightly.

When it comes to staterooms, the selection really depends on where on the ship you wish to be located. There is The Haven, mini-suites, balcony, inside, or some very comfortable single studio units with its own communal social lounge area. Most of the cabins with balconies will accommodate four and some inter-connect. Mini-suites are in effect a stretched balcony with a much larger bathroom with double sink and exceptionally large shower including six sprays. Plenty of room in all the cabins and very easy to use Smart TV.

Any criticisms Yes. There was no indication of what is on each floor in the elevators (lifts), but that can be quickly put right with printed signs. And the lack of a map of the ship in the staterooms. This one is also easy to correct with the diagram from the sales brochure printed on the reverse of the horizonal Encore silhouette provided.

Harry Sommer got it right.  It is a “fantastic” ship – 36hr was not enough! 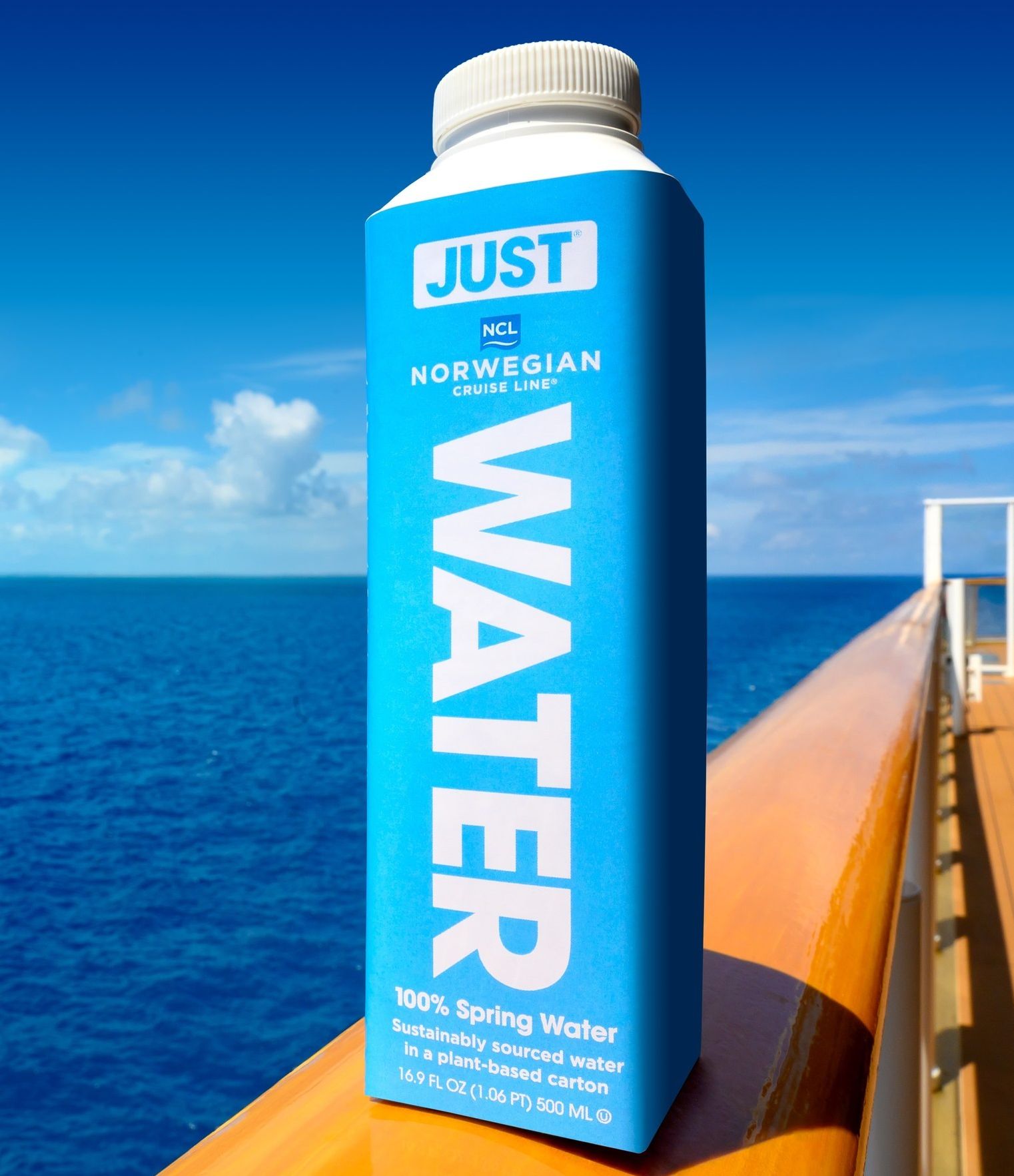 Norwegian Cruise Line made the decision fairly early in the development stage of Encore that single-use plastic bottles were ‘no go’ from day one.  By 1 January 2020 this will be the case across the fleet. In 2018, the company eliminated single-use plastic straws and as a result of this most recent initiative it will replace more than 6m bottles every year.

These efforts are driven by the company’s Sail & Sustain environmental programme, which is its commitment to minimise waste to landfills, reduce its CO2 emissions rate, increase sustainable sourcing and invest in emerging technologies.

Available on board is a reusable plant-based 500ml carton with 100% UK-sourced spring water.  https://justwater.com

Splash Academy, the children’s waterpark, will be replaced with the adults-only retreat Spice H2O, a daytime lounge featuring two new hot tubs and a dedicated bar, which transforms into an after-hours entertainment venue. Mandara Spa will double in size to nearly 7,000sq ft and include a relaxation area with heated loungers, a new Jacuzzi room, a sauna, steam room and water therapy experience. The expansion of Pulse Fitness Center will allow guests to begin or maintain their fitness routines while at sea. The ship will also debut contemporary hull art.

Norwegian Spirit sails out of dry dock in February to offer some of the most sought-after itineraries around the world including 10 new ports of call. She will be the first in the company’s fleet to visit Celun Bawang (Bali); Jakarta and Surabaya (Indonesia); Beppu, Kumamoto, Nagoya and Tokyo (Japan); Taipei – Keelung (Taiwan); and Yangon (Myanmar).

See also AND FINALLY in this issue.  It is a cruise story.  Sort of! 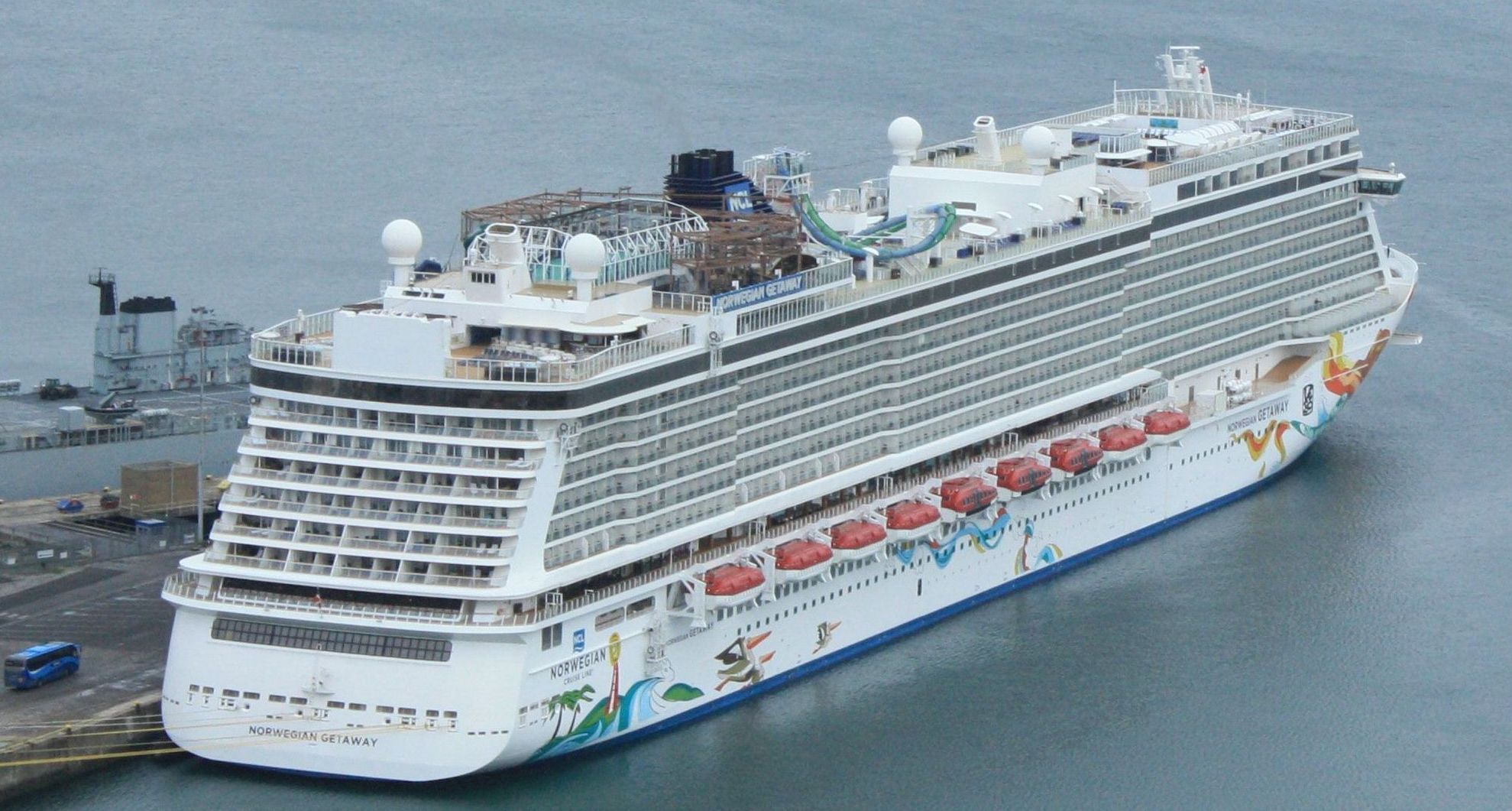