More than 3,000 passengers booked with Oxford-based Voyages to Antiquity had their cruise cancelled at very short notice last week.

Many were due to fly out on Thursday (2 May) to Athens for a couple of days' sightseeing before joining MV Aegean Odyssey for a 12-day trip into the Black Sea. Odyssey was to become the first British-managed ship to visit Odessa in the Ukraine for some years. Voyages to Antiquity spent two days calling would-be holidaymakers giving them the bad news. No email confirmation as a back-up was attempted.

In a statement, Voyages to Antiquity said the 47-year-old ship had developed a fault with her starboard engine which was confirmed following detailed inspection by maritime authorities in Athens. In 2010, she undertook a multi-million pound overhaul and looks and feels like a very modern ship.

Current passengers on the extended “Grand Classical Greece and Black Sea” trip for 22 days will have disembarked on Saturday, hopefully with cheques in their hands for the missing part of the cruise.Ten cruises have been cancelled. The next one advertised is on 19 September: “Italian and Adriatic Highlights”, Rome to Venice, 15 days, with the last cruise currently shown on the Voyages to Antiquity website as “Classical Greece and Islands of the Aegean”, starting 2 October. No programme is advertised from that point onwards and the ship is known to be on a long-term charter to an American operator in 2020.

Among those likely to be disappointed with the turn of events is the explorer Sir Ranulph Fiennes, due to board Aegean Odyssey on 16 July for a cruise calling at Oslo and Geirangerfjord fjords before making its maiden visit to Aarhus, Denmark’s second largest city. This was announced only last week.

Passengers on the first of the cancelled cruises began to receive their refund cheques last Wednesday.

Voyages to Antiquity is advertising four cruises in September, but all are currently fully booked. The company announced last year that Aegean Odyssey has been chartered from October and it looks rather like another small British cruise line with specialised voyages, Swan Hellenic, will disappear, albeit for different reasons.

This is a specially-extended news item by BTN editor-in-chief Malcolm Ginsberg, who was booked on the Black Sea cruise. “These things happen and Voyages to Antiquity is ABTA bonded”, he said. “But if there were problems, the company should have made the cancellation decision earlier. The ship operated the last cruise on schedule, disembarking all passengers at Athens on Saturday. No offer of an alternative holiday, or a future cruise discount. What is really happening?” 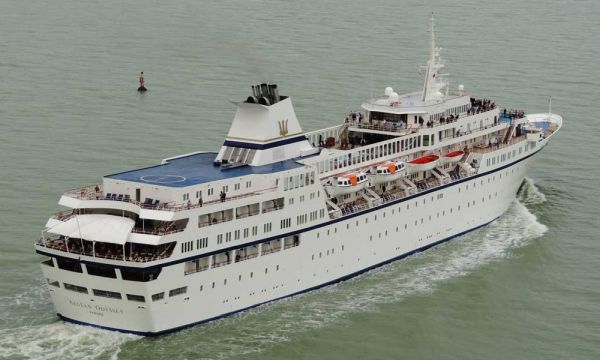