A warning of cutbacks as a result of strike action was followed up immediately by Ryanair last week with news it was cutting its Dublin-based fleet from 30 to 24 aircraft for the winter 2018 season (see separate story in this issue). 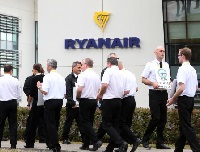 The warning came as the airline presented its first-quarter 2018 results, saying weaker fares plus higher staff and fuel costs had cut profits by 20% to €319m compared with Q1 last year.

The figure was in line with earlier guidance issued by the airline and slightly ahead of a forecast of €305m, but shares fell nearly 7% in Dublin trade after it warned average fares would be lower than expected this summer period.

It was ironic Ryanair should release its Q1 financial details ahead of its worst week so far for strike action, with more than 300 of its daily 2,400 flights cancelled on Wednesday and Thursday because of the cabin crew action.

The airline was credited with averting strikes before Christmas by deciding to recognise trade unions for the first time in its 32-year history (BTN 18 December 2017).