At an informal press conference on board easyJet’s first A321 en-route to Farnborough (see A321 neo) chief executive Johan Lundgren was questioned regarding Heathrow and the airline’s attitude towards the airport.  He was quizzed concerning the use of steps instead of an airbridge, easyJet being the airline highlighted by BTN previously (See issue 21 May) 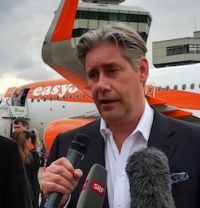 He made it clear that his attitude to Europe’s largest business hub was completely different from previous CEO Caroline McCall noting that Heathrow was the only major mainland airport the airline did not fly into and was something they were looking at 'as the opportunity arose'.  Questioned regarding a change of gauge concerning typically Aberdeen, and Airbus replacing 86-seat Q400s, he had no comment to make. EasyJet could compete with BA on certain routes, and does already out of Gatwick.

Regarding the use of airbridges, he said that it was not now the airline’s policy to use steps, which many passengers find difficult and require more staff involvement.  Gatwick charges no more for the walk-on system than boarding from the apron. The airline is aware that with the A321 neo, and 26% more seats, it is something it will carefully monitor.

It's Luton which has the real problem: passengers sometimes have to queue on steps inside the building, something I regard as downright unsafe.

Will LHR's strict adherence to a curfew prove to be an operational barrier that can be overcome? There will be a need for late-running flights to return to base in time for next day's ops, and I'm not sure that LHR will be able to offer that certainty in the way that LGW does.