ON TOUR: Runaway success for Eilat 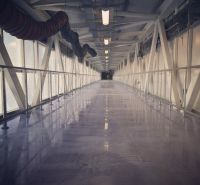 On  Monday 21 November,  my Ramon International Airport news item saw the light of day. It was one of those pieces clearly of interest to readers but not time sensitive. The new airport seemed a long way away.

What had escaped my notice was the fact that Monarch on the following Thursday was returning to Ovda (VDA), the international airport for the Red Sea resort of Eilat, for the winter until 27 April 2017 with a weekly Luton service. It also flies to Tel Aviv Ben Gurion (TLV) year round three days a week on Mondays, Thursdays and Sundays from Luton (LTN) and on Thursdays and Sundays from Manchester. The airline wanted to show me its operation.

Luton airport is a struggle at present, with major works in and around the terminal. The good news is that check-in and security are now all on the ground floor and a new smart-looking duty-free hall has opened. Also finished is the completely refurbished Aspire lounge with spa and shower facilities. Hot breakfasts are offered and snacks are available during the day. There is a quiet section if all you want to do is take out your laptop and/or iPhone and get on with some work. But do watch the departure boards. There are no announcements.

Monarch operates a fleet of 34 aircraft, a mix of Airbus A320s and A321s, which will be replaced by the more economical and quieter Boing 737 MAX from 2018. Where Monarch differs from competing carriers is a 174 leather-seat layout on its A320s rather than 180 or even 189 offered on competitors. The first six rows have a 32in pitch, making the journey really comfortable. The rest follow the industry-standard 28in pitch.

The units are supplied by Ricardo and feature extra back of seat storage rather than the cheaper netting facility favoured by some. Passengers can purchase hot meals and kosher smoked salmon bagels are offered as well on the Israeli destinations. It is an easy 5hr flight, with a most spectacular view over the Negev desert as you descend.

Ovda is a military airport allowing civil flights and is 40km from Eilat. With Israeli government financial incentives now in place, international passenger numbers have increased dramatically by 168% so far this year, with recent airline arrivals including Ryanair, Ural Air, Europe Airport, Transavia France, Finnair and Monarch. For the first time this year, 100,000 passengers will be exceeded, small by any standards but with potential for enormous growth when transferred to Ramon. Add to that 1.16m users of the current Eilat Airport (ETH), mostly domestic, and clearly there are huge possibilities.

Eilat is the southern gateway to Israel. It is the entry point to the country for automotive products from the Far East, and a lively holiday resort, expensive by UK standards but with some fine 5-star hotels and superb beaches, but lacking leisure infrastructure investment. On ‘Black Friday’, you could not move in the relatively-new large shopping mall situated literally at the end of the runway.

The current Eilat airport dates from 1949, is a single 1900m runway operation, and sits right in the centre of the city. There are ideas for a major redevelopment of the 1,000-acre site once it closes with Ramon’s opening, including new hotels, holiday facilities and an extension of the popular marine complex and lagoon.

The idea of a new international airport for Eilat has been around a long time. It is now actually happening, with an operational target date not set, but hopefully October 2017. The airport is just 19km from the centre of the city, and sits next to the main A90 road linking Eilat to Be’er Sheva and the central parts of Israel. A light-rail link is also planned to the city and a railway station is part of the master plan. Eilat will also serve as an alternate for Ben Gurion if that airport was closed for some reason.

Currently, aircraft have to divert to Larnaca (Cyprus). Ovda is only staffed from a passenger point of view for the scheduled operations and is not a practical substitute. It takes at least 1½ hours to activate civilian usage by bringing up personnel from Eilat.

The new airport site covers 1,976 acres, with the terminal building extending for 30,000sq m and including 32 check-in counters and eight gates. Aircraft up to and including the Boeing 747 can use the facility, but not the A380 - it is considered too expensive to build for possible limited use. The eastern perimeter fence marks the border with Jordan. 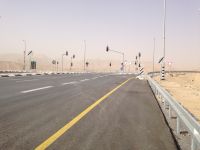 At the time of writing, the single main 3.6km runway and the parallel taxiway, plus the apron, are complete. The 91m high control tower is structurally finished. The technical equipment and airport lighting has to go in. There are 29 aircraft stands planned but no airbridges, with passengers expected to use escalators to and from the terminal building and the apron.

There are eight loading gates and buses can be provided. The marketing programme calls for 1.8m passengers in phase one. Leading the project is Hannan Moscovitz, current director of the Eilat airports, who says a number of new airlines are interested in coming in, plus the current Ovda and Eilat operators. The present incentives remain in place. Cargo facilities are not in the present plans but could be instigated. There is ample room for private jets. 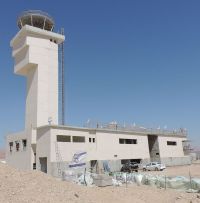 Advanced technologies are being implemented throughout the airport, covering security, operations and management. The airport will offer the most advanced baggage-screening system available, hold baggage screening (HBS), which sorts 100% of passenger baggage.

The overall management of the airport will be supported by the micromanagement platform called Operational Readiness, Activation and Transition (ORAT).


“Greenfield Airport” within a desert landscape

Ramon Airport is being built within a remarkable natural resource (also see Flamingo Park below). Out of respect for the environment, the airport is a green project and great efforts are being made to preserve the local desert characteristics. Materials for construction are excavated locally and instead of grass the airport landscaping will use desert topsoil that was removed during the building process and replaced afterwards.

Currently, 1,000 workers a day transfer into Israel from Jordan.  Aqaba airport last year served just 117,000 passengers, split 50/50 domestic and international, with numbers falling. Ramon could be a gateway to Jordan and Petra (see BTN 4 May 2015), with both countries benefiting. It needs initiative.

Ramon International Airport is named after Ilan Ramon, Israel’s first astronaut, killed on the fatal Columbia mission on 1 February 2003, and his son Assaf, who also died in an aircraft accident in 2009 when his F16 fighter crashed during a training exercise. 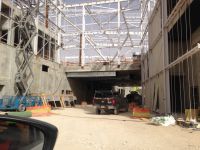 There is only one fly in the ointment – the possible closure of Sde Dov Airport, a domestic operation sitting on the coast just to the north of Tel Aviv with apartment blocks parallel to the single runway. It is the largest supplier of passengers in and out of Eilat, with 700,000 expected this year.

Israeli’s neighbours are no different from Heathrow’s. Once they move into their new homes, suddenly they are aware of an airport nearby – “what a surprise!" The plan is to transfer all flyers to the refurbished Ben Gurion T1, essentially domestic and ‘low-cost’ services, and try to fit all the extra air traffic into an already-busy system. Aircraft taxiing will become a real problem, and likewise road congestion is expected to increase considerably. It’s all very negative. As things stand, it might happen but is a negative move particularly with Ramon opening and its potential with domestic traffic. Some business will be lost.

The hotel investors in Eilat are positive, none more so than the Dan Group, which operates the famous King David Hotel in Jerusalem and selected quality properties throughout Israel, with 60% of its business generated from outside the country.

Rafi Baeri, VP marketing and sales, is enthusiastic. “The opening of the new airport will attract many international flights and we are confident that this percentage of tourists will increase to our two Eilat properties, the outstanding Dan Eilat and Dan Panorama Eilat," he says. "The Dan brand is particularly popular with travellers from the UK, France, Russia and the Scandinavian countries, so the growth potential for us, once the new airport is functional, is very significant.”

Restrained due to current competition rules, the Fattal Group is the largest hotel operator in Eilat, with 10 properties owned and manged, including the 5-star Herods Palace. Galit Halpern, director of incoming tourism, says currently much work is being done investing with the existing hotels in renovation and refurnishing services. In Europe, the group is best known for the Leonardo brand and in total operates just over 100 properties.  Ron Aloni, VP marketing and sales at Fattal sees new potential developments with the opening of Ramon.  “One big advantage is the likely growth in the number of points serving Eilat,” he said.  “This will increase guest arrivals, particular in the winter season.”

Ramon International Airport should bring prosperity for Eilat. It is already a duty-free zone. The airport authority (in effect the government) has shown what can be done. The east can be opened up in aviation terms as well as the west, maybe even the United States and Canada. Eilat as a city needs vision and investment.  The current airport site will be available from 2018 and we wait to hear of plans for new hotels, leisure facilities and an extension of the existing lagoon. With Europe suffering from a reduction in holiday destinations, there is a challenge for Eilat. One part of the jigsaw is nearly in place. The city has a bright future.


RAMON AIRPORT AND THE FLAMINGO PARK 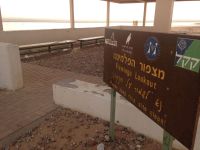 On the A90 road just south of Ramon is a series of large salt lakes sitting on the Jordan border, linked to another group of what are in fact very large ponds just north of the current airport.

It is owned by Salt of the Earth Eilat Ltd, a company established in 1976 and now a major international producer of the commodity. The two sites, totalling 440 acres, are linked.  But what is amazing is that with the Ramon location, it has become a stopping-off point for, and in some cases the home to, flocks of flamingos as they migrate season to season from Eastern Europe to Africa. The area is already an official lookout and there are plans to develop it further, perhaps in conjunction with the underwater observatory in Eilat, a popular stopover not only for naturists but tourists as well.

From the experience of the current Eilat Airport, where the lakes are even nearer, the aircraft noise will not turn the birds away. 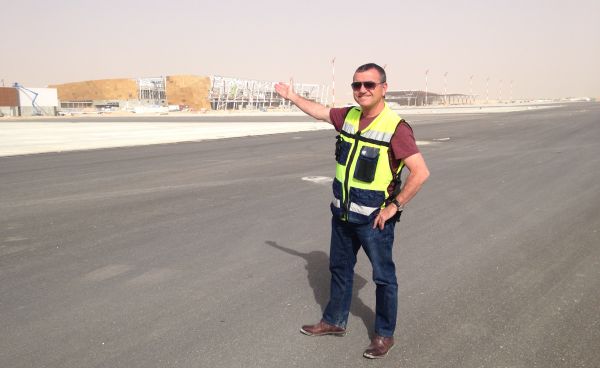 A railway station has been provided for at the new airport with a line to Eilat. The idea of a track through the desert north is a practical one (the famous Hejaz Railway ran through Jordan before the First World War) but if it were ever to be built it would take most of the air traffic from central Israel to the Red Sea, creating a white elephant of an airport, relying mostly on international trafic

At one stage the airport was to be on a new regional rail link between Tel Aviv and Eilat, but this idea appears to have been dropped.