ON TOUR: Magellan around the (British) world

Magellan, the Spanish explorer, was not the first to circumnavigate the world (BTN has looked into that – see issue 2 May 2016) and the British cruise ship named after him is certainly not the first to go around the UK. With Marco Polo and next year Columbus too, Cruise & Maritime Voyages (CMV) is beginning to gather a small fleet of ships with historical seagoing adventurers’ names. You never know, but the Vasco de Gama might be on for 2018.

See August CRUISE NEWS in this issue for all about Magellan. 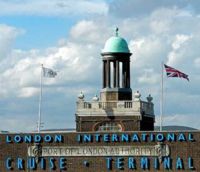 BTN joined Magellan in early July for a nine-night voyage from the London Cruise Port Tilbury. An early-evening departure saw us making our way up the East Coast, with Kirkwall, the capital of the Orkney archipelago, the first port of call after a day at sea.

Stornoway, Tobermory, Dublin, the Isles of Scilly, Guernsey and Honfleur followed. The cruise routeing really did make sense with an early-evening Tilbury departure, 36hr to rest and sort ourselves out, and then one port of call per day before returning to the Thames.

The evenings are light at this time of the year in the far north, and the weather usually kind. Once towards the west, you are in the Gulf Stream.

CMV offered on average six different tours per port. For some on board, each brief visit is a taster, with an opportunity to visit again later at a slower pace, and for others it is “been there, done that!” 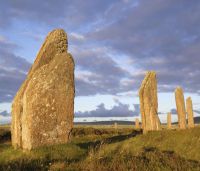 It is a long walk, or courtesy bus, to the fine visitor centre in Kirkwall. The magnificent St Magnus Cathedral, a legacy of the town’s rich Viking heritage, dominates the skyline. In its shadow, the town is a cluster of grey stone buildings lining narrow, flagstone streets. Modern-day Orkney is a hive of creative activity and its craft workshops are perfect for a special souvenir, while the museum takes you back through history and was currently home to a Battle of Jutland exhibition.

Kirkwall is at the head of Scapa Flow, the Royal Navy’s HQ in both world wars, and was the last resting place of the German High Seas fleet, scuttled in its cold waters in June 1919. Nine German sailors died when British forces opened fire as they attempted to scuttle their ship, reputedly the last casualties of WWI.

CMV offered five excursions to explore these beautiful islands whose history can be traced back some 6,000 years through Neolithic standing stones and the magnificent archaeological site of Skara Brae. 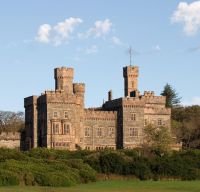 Originally a Viking settlement, Stornoway is today the main town on the island of Lewis in the Outer Hebrides. The charming town is situated around a bustling harbour and has a range of local specialist shops selling handcrafted goods from the Outer Hebrides including jewellery and the famous Harris Tweed. The traditional ways of life are still very much in evidence and the beautiful island is considered the heartland of the Gaelic culture.

Our 4hr tour took in some of the most important prehistoric sites in Scotland, including the Neolithic Callanish Stones and Pictish Carloway Broch. But to show that in some respects Stornoway is one of the most modern of the United Kingdom’s northern outposts, a Lews Castle tour is conducted on a Segway.
www.stornoway-lewis.co.uk

Established in the late 18th century as a fishing port, Tobermory, the main town of the island of Mull, is one of the prettiest ports in Scotland and the backcloth to the children’s series Balamory, which ran from 2002 until 2005. The picture-postcard village has a large natural harbour where colourful boats bob on the waves watched over by a rainbow of brightly-painted buildings backed by woodland-fringed hills. It is also the home of the Mull Aquarium, Europe’s first catch-and-release aquarium, situated on the quayside near the ship tender station.

Tobermory is a tender port. Our half-day tour took us to Duart Castle – a 13th-century fortress and home of the 28th Chief of the Clan Maclean and his family. From the 13th to the 17th century, the Clan Maclean have lived at Duart Castle, controlling the sea lanes around Mull, in between fighting the MacDonalds and the Campbells as well as each other. The castle was garrisoned by government forces following the Jacobite Rebellion of 1746, and razed to the ground when they left in 1756. The castle remained a ruin until 1911, when the 26th Chief of the clan, Sir Fitzroy MacLean (one time Chief Scout), commissioned architect John Burnett to restore the building to its former glory.
www.tobermory.co.uk
www.duartcastle.com
www.exploremull.com 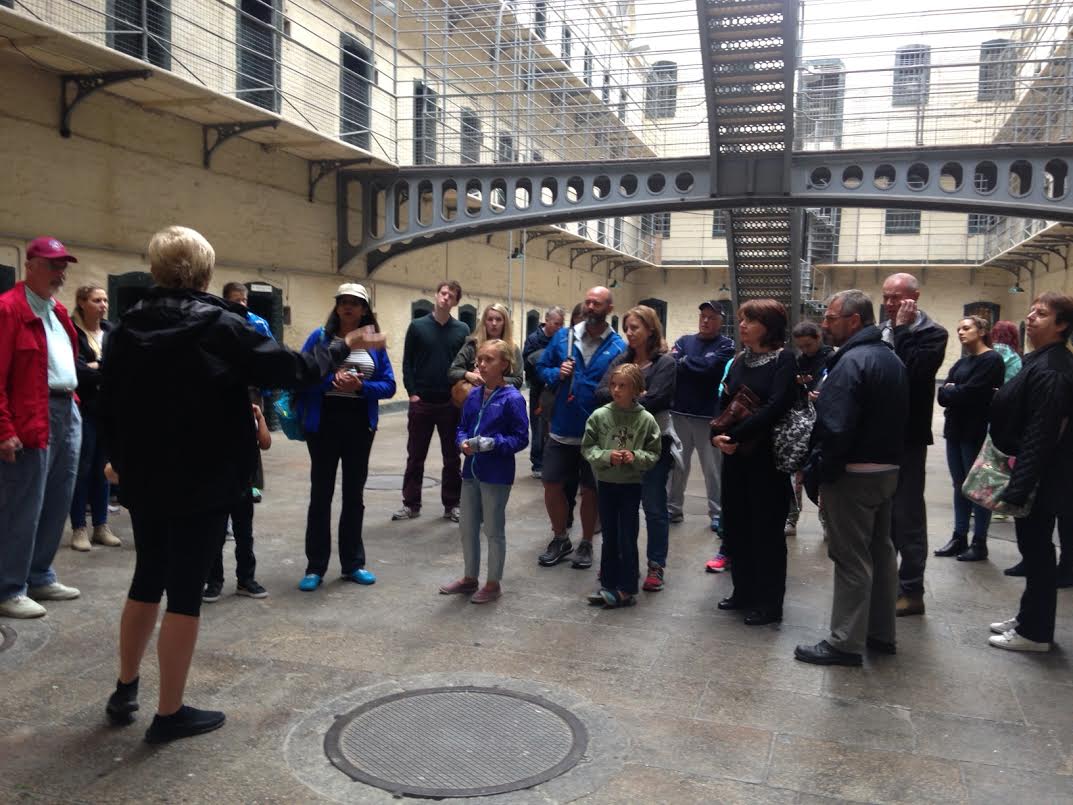 Dublin lacks at this point of time a cruise terminal, but once again a courtesy transport was provided to the centre of the city. Our morning was spent on an open-top bus tour to Kilmainham Goal, Victorian Wing, and the finale for the leaders of the Easter Uprising of 1916. It is a grim but fascinating place. Phoenix Park, Europe’s largest city centre greenery was driven through. Due to time constraints, we had to give a miss to the Dublin Zoo.

The capital of the Irish Republic is, with its friendly locals, fascinating history, legendary literary tradition and charming mix of medieval, Georgian and modern architecture, a city of unforgettable character.

We just wandered in the afternoon, taking in Trinity College with its fine quadrangle (The Squares), glorious library and the Book of Kells dating from around 800AD, an illuminated gospel manuscript in Latin, containing the four gospels of the New Testament together with various prefatory texts and tables.

Rather like Edinburgh in recent times, Dublin is bringing back the trams and causing traffic chaos. Together with an immense number of American visitors who don’t know their right from their left, one has to be careful when walking around, with some streets pedestrianised and some not. No time for the Guinness Storehouse, Old Jameson Distillery and the Irish Whiskey Museum, although once back on board we heard about some who managed to make them all.

A three-day Freedom Card gives you transport from the airport and most of the attractions. But then you might want to explore some of the rest of Ireland.
www.dublinsightseeing.ie

Britain’s only archipelago, the magical Isles of Scilly lie just 28 miles off the coast of Cornwall. St Mary’s, the largest of the five inhabited islands, is a delight with white-sand beaches, tranquil waters and stunning seascapes. The attractive village of Hugh Town, considered the "capital", is the hub of the islands’ activity. It is the last resting place of former prime minister Harold Wilson.

The second-largest and the only privately-owned island is Tresco, where, in the glorious Abbey Gardens some 20,000 exotic species thrive in the sub-tropical climate. Founded in the 1850s by Augustus Smith, Lord Proprietor of Scilly, the gardens are quite unique and also include Valhalla, the national collection of ships’ figureheads. Local boatmen provided the tenders and we were able to spend a morning on the island and transfer to Hugh Town in the afternoon. If you really want to enjoy Tresco, there is accommodation ranging from traditional cottages to the 4-star New Inn, which has 16 ensuite bedrooms.

Sad to say, the helicopter service to Penzance from both St Mary’s and Tresco has long gone. You can reach the isles by plane from Exeter and Newquay airports or by sea from Penzance. 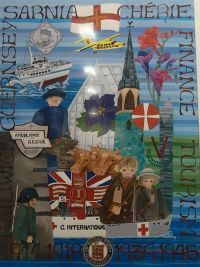 Guernsey is not part of the EU, has no VAT, and seems to thrive. Victor Hugo lived here for many years and it is where he wrote Les Misérables (see AND FINALLY). In what is a short season, 120 cruise ships are expected to visit this year, but none to dock. It is tenders once again and negotiating the traffic-light system into the pier.

New for this year is La Petit Train, a three-car unit which takes you around St Peter Port itself for a 35min tour with commentary. It costs just £1 and is a very good starter introduction.

The attractive town is a delight with cobbled streets, steep stairways and alleyways winding their way down between the houses to a picturesque waterfront of grey and white stone buildings. Guernsey is geographically closer to France, yet loyal to the British crown, and this is reflected in the wonderful Anglo-French ambience around the place. For more than 800 years, Castle Cornet has stood guard over St Peter Port and it is an easy walk from the drop-off point. Guernsey has a totally different ambience from Jersey, perhaps more relaxed.

The Guernsey Tapestry Gallery, in St Julian’s Avenue, houses the Bailiwick of Guernsey Millennium Tapestry, a project that involved the whole community. It illustrates 1,000 years of local history in 10 panels of embroidered canvas work, each panel covering one century and produced by one of the 10 parishes. Included is the parish crest. There is an audio guide available. 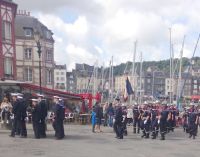 Sitting opposite Le Havre across the Seine, with the amazing Le Pont de Normandie cable-stayed road bridge connecting the two, is the pretty town of Honfleur. Magellan tied up at a wharf on the outskirts a pleasant 15min walk away (or a 10min courtesy-bus ride).

Over the years, many renowned painters and writers have been attracted to Honfleur, with its narrow half-timbered houses, cobblestone streets and charming old harbour set in a sheltered cove off the tidal estuary. It is simply enchanting, our visit coinciding with Bastille Day, an opportunity for the local corps band, and the fire brigade, to demonstrate their skills.

Unlike many of its Normandy neighbours, Honfleur was spared during the bombing of World War II. Nestled in its tidy, picturesque streets are historic buildings house art galleries, artists’ studios, boutiques, restaurants, cafés and fine souvenir shops.

The Normandy beaches are two hours away, and well worth a visit, but for us another time.
www.honfleur-tourism.co.uk
www.informationfrance.com/Honfleur.php

PLUS A SPECIAL "AND FINALLY"

With this a CRUISE ISSUE we could not resist this effort by the waiters and galley staff on CMV Magellan. BTN recommends they stick to their day jobs, but it was a fine effort. And with deference to Sir Rod Stewart: