The enigma that is Willie Walsh has been at it again. 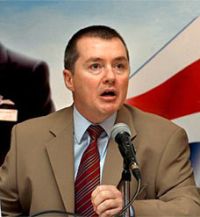 With one breath he is talking about pulling out of London City Airport (see BTN 8 February) and with another saying that British Airways will consider purchasing some Bombardier CSeries regional jets for use at the airport.  Whilst CEO of International Airlines Group he is currently de facto the front man for BA too.

In an interview with the Belfast Telegraph, Walsh said the airline will “definitely” consider the aircraft some of which major parts are manufactured at the former Shorts plant in the city.  This comes at a time when both the aircraft and the factory are in the news. (see in this issue)

“I’ve seen the aircraft and I’ve flown the simulator personally,” he said. “The CS100 could be an option for us at London City Airport.”

The maiden CSeries landing is expected at LCY in the coming months, with SWISS, an airport resident expected to put the aircraft into service later this year on its Geneva and Zurich routes.  It could also potentially serve New York JFK non-stop, which BA currently flies to via Shannon.

Mr Walsh has a record of impossible threats previously suggesting that BA might pull out of Heathrow if the charges were too high.  www.ba.com

I seem to recall Lord King threatening to shift BA from Heathrow to Stansted in the 1980s. BA has a history of attracting loose cannons.