Business Travel News has long promoted Northolt as a solution to the London connectivity problem for the Provinces until the new runway is ready.  Heathrow served 20 UK destinations 30 years ago.  It is now down to seven with some of these under scrutiny by the BA routes team.

Several airlines are known to be considering applying to the MOD for a change of use.  Private (sometimes noisy) jets currently can use the airport.  Scheduled commuter airliners, cannot.  The Cabinet Committee, now deliberating on the Airports Commission report, should invite (or suggest) Britain’s regional airlines, always innovative and with vision, to apply.  No increase in movements, less noise and more safety.

The Chancellor will be happy, and also very much the regions.  It is a very valuable site.  SEE ALSO London Northolt handling contract in this issue.

With a few alterations to declared runway lengths, to the ILS alignment and to airfield lighting arrangements, Northolt could conform to CAA civil aerodrome licence requirements.  The cost would be minimal.

Shortening the runways, as per the recommendations of an MOD commissioned report by airfield design consultants Mott MacDonald dated February 2012, would redefine the declared runway distances in line with civil safety criteria perhaps to the London City length (1200m) as against the military (1687m).  Whilst this might mean that the airport would no longer be suitable for some of the larger business jets, it would nevertheless be ideal for regional airliners such as the Q400 which could provide vital connectivity to the regions.  The airline activity would likely yield the MOD considerably more income than business aviation, which would meet the MOD's stated aim to sell spare capacity in order to defer running costs.

Provided the recommended safety measures are adopted this would completely mitigate the safety issues currently affecting the aerodrome and therefore appears to be an elegant solution to an increasingly pressing problem.  The MOD has argued in evidence to the Judicial Review that shortening the declared runway distances would adversely affect military operations, but entirely different declared distances might easily be applied to military operations if that is what the MOD requires.

A dedicated civil passenger terminal could be conveniently located on spare land to the west of the current terminal, creating a civil enclave with direct access to the A40/Western Avenue.  This would leave the current military and VIP operations unaffected.

Such use of RAF Northolt would also greatly benefit the UK economy by assisting in providing badly needed links to the ‘Northern Power House’.  This model of a runway shared by military and civil operations is widely adopted throughout Europe and has proven very successful.  The current situation at RAF Northolt is unsustainable because the runway distances are declared to military as opposed to civil specifications and as a result they do not probably provide the required safety margins applicable to civil registered aircraft operations.

RAF Northolt could easily be made safe by a few simple expedients and BTN argues that the CAA and MOD should identify, define and adopt such measures without further delay.  The Judicial Review of January 2015 made it clear that the CAA is responsible for the safety of all civil registered aircraft using RAF Northolt and that the government cannot enable its own aerodromes to take civil aircraft despite being less safe than privately owned aerodromes.  This proved not to be contentious.

BTN understands that the CAA intends to publish its proposals regarding civil traffic at RAF Northolt before the end of the month.

By April 2016, passengers from Glasgow Prestwick could be at Oxford Circus in under two hours.  Heathrow is about five miles away as the crow flies and Terminal 5 to Northolt 15 minutes.

A SAMPLE OF POTENTIAL ROUTES

WEST LONDON AREA (Northolt is A) 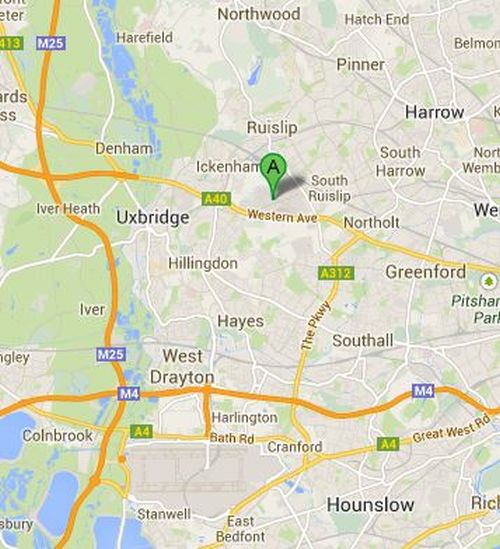 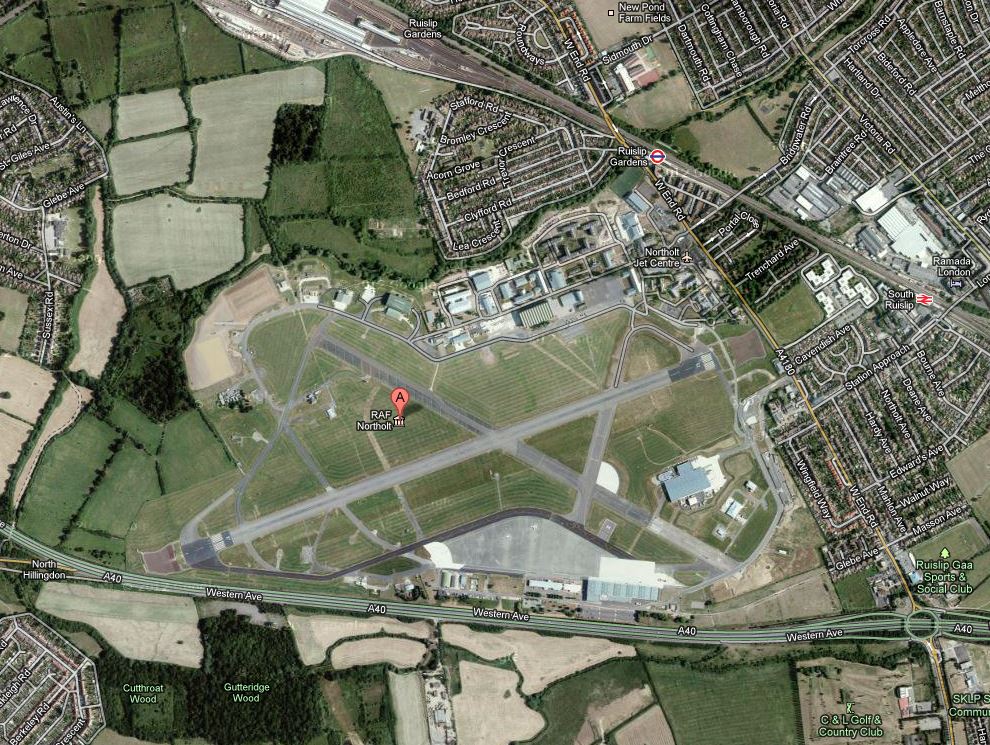 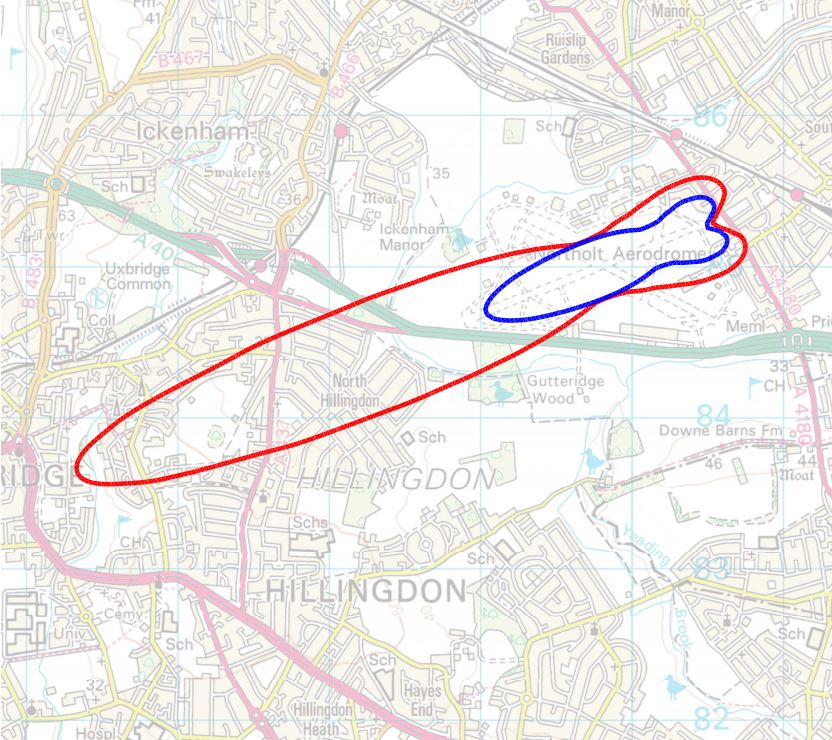 If there is an insistence that Heathrow expansion is the only option, it could be worth revisiting the suggestion from earlier decades of developing Northolt, the RAF base, for short-haul flights and extending fast transport links between the two sites along a road corridor. This has to be the attraction of being a classic British solution which is not perfect but relatively cost-effective and feasible.

In March 1994 I wrote a report 'A Missing Piece of the Puzzle: the Search for Runway Capacity in the South East'. The missing piece was in fact Northolt as a feeder for LHR. However, I failed to pursue the idea and argue the case more widely. The Editor is to be commended for having consistently argued the Northolt case, which remains as strong as ever. As for connecting to Heathrow, the problem is easily addressed by having a coach/minibus shuttle. Those who say it cannot work, perhaps because they would not use it themselves, should stand aside and let the market be tested.

Not true. The Airport Commission said that Northolt was outside its brief. Nobody knows how much Heathrow traffic will use T5 to/from Northolt for say Prestwick or Liverpool. It is all a bit of a guess but is only 15 minutes by road, less than T4 and a change. It is the Regions and the West London corridor who will benefit the most , the airport connected by Tube and Chiltern Railways at South Ruislip to the centre of town, and Western Avenue dual carriageway by road. Also Oxford and the west from next week by Chiltern. The Q400 (see the diagram above) is far quieter than the BAe 146 and the runway aliment is not an issue, OK now and clearly still OK with the same number of movements.

> "I have been advocating the use of RAF Northolt for years but it never seems to be considered in the London airport studies". Not true. The Airports Commission studied proposals to use Northolt to accommodate some Heathrow traffic. It concluded that Northolt's runway alignment would place significant restrictions on its use and that the population affected by noise from increased operations there would be substantiial. Apart from which, nobody is going to fly to Northolt from the UK regions and then get on a number 140 bus to Heathrow to catch their longhaul flight, they will just connect at hassle-free Amsterdam instead.

There are two ways of looking at this...one is: minimal costs is definitely a plus, but number two: as it is, London is already served by five different airports.. None of them are properly connected to each other by speedy links, which makes changing airports for transit passengers a true nightmare! No other world-class city has such chaos! Why add more to it??

Of course Northolt should be opened up,given its close proximity to LHR but this has been a sensible option for many years under the noses of the powers that be.Which carriers can provide the services currently given the old problem of a/c based in the regions and the associated costs. By the way there are many good ex airline people around with lots of experience and knowledge of these regional markets and the way they the capital for point to point traffic plus the long haul connectivity.

Mr Potter is wrong about the runway alignment. NATS are happy and it works OK today with the same as the proposed movements. The Airports Commission did not rule out Northolt in its recommendations but said it was outside its brief. The UK regions want quick easy access to and from London and also Europe’s greatest hub. It is a simple fix for the current problems.

Northolt as a stopgap for a new runway would never work. 1/ the runway alignment causes problems for Heathrow's northern runway as it is, forcing aircraft to climb rapidly away to avoid collisions. 2/ There are enough scheduling problems in getting passengers from T1 to T5 or from T4 to T5 in time for connecting flights, and in those situations they are at least at the same airport. 3/ Why fly to Northolt and connect via a train line or monorail when you can fly to Schiphol and get a coffee before walking on to your next flight. see http://www.citymetric.com/transport/uks-hub-airport-isnt-london-heathrow-its-amsterdam-schiphol-1190 Yes Northolt could become another regional airport but it has been conclusively ruled out by the Airports Commission (see point 2.3.32 https://www.gov.uk/government/uploads/system/uploads/attachment_data/file/452271/consideration-of-consultation.pdf) 4/ And soon due to all the dragged out debates, why would passengers fly to Heathrow at all when they can connect to just about anywhere else on the planet by using the new six parallel runway super hub airport being built in Istanbul, which has plans for high frequency short onward hops to Russia, China, Africa, Europe and Asia together with longer hauls to the Americas and Australasian destinations.

Whilst the Isle of Man enjoys a comprehensive selection of air services to London - to LCY, LGW ,and STN - none provide the comprehensive network of onward connections available from Heathrow. There would be strong local support if Northolt could genuinely be an integral part of the Heathrow transport structure.

It really is a no brainer that the tax payer and George Osborne could have a big smile on their faces if they adopted the ideas put forward by BTN for a long time. Northolt is like London City Airport but on the other side of London. If it was opened up for civil traffic it would cost the taxpayer nothing and the MOD could still have free access. Thus a big saving to government funds fo use elsewhere.

The introduction of European flights would just complicate matters as they would need immigration facilities. As it stands it is possible to have apron transfer for hand baggage passengers direct to South Ruislip station with both the Underground and Chiltern Railways. In reverse the normal security.

Totally agree, such an obvious solution! There could be a monorail shuttle between Heathrow and Northolt, but why confine the flights to domestic ones, it would be perfect for ll short-haul flights.

Opening up Northolt would provide renewed access to the LHR global hub for those points like Inverness, Newquay, Prestwick , Humberside etc, that have lost their Heathrow links and have no current air or rail alternative to access Heathrow. Mr Brooksbank should talk to those in the "lost" peripheral regions, I think he would get a different message about the potential for Northolt to provide LHR connections to such points and help boost their economies! Until and unless LHR R3 is built, Northolt is the lost regions only viable option to secure Global connectivity via Heathrow.

I have been advocating the use of RAF Northolt for years but it never seems to be considered in the London airport studies. A natural solution to the LHR problem at minimal cost and disturbance. Let's get on with it - even MoD will benefit from this additional income. WIN / WIN!

The Editor is bring up this once again, kind of like Gatwick not acepting that Heathrow has been chosen for expansion. Those of us who are in the North primarily fly to Heathrow to connect and we actively avoid connections which require an airport change. If we go to London we take the train, the overall journey time is faster when check in and security time is considered and the end point more convenient than flying. RAF Northolt is a pointless suggestion as those of us who need to travel need to arrive at Heathrow where those of us with any regular business travel experience avoid even changing terminal if we can, let alone changing airport. RAF Northolt would fail as a solution because it wouldn't work as a feeder to Heathrow for international flights.