Travellers in south-west England and East Anglia have been promised better connections with the rest of the world after Flybe signed a five-year deal with the Regional and City Airports group for an Embraer 195 twinjet to serve Exeter and Norwich from next March. 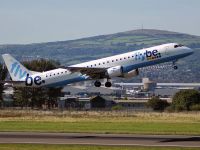 Known as ‘Project Blackbird’, the five-year contract will see the aircraft serve eight routes to five destinations in continental Europe to be announced later.

Flybe said it was still in ‘active discussions’ with other parties to redeploy a further six E195s.

The Exeter-based carrier was the first airline in Europe to acquire the 118-seat E195 for use on its longer services such as those to Spain. The original fleet contained 14 aircraft, two of which have been based at Cardiff under an agreement with the airport there signed in March this year.

A further five aircraft have been handed back to lessors and Flybe is in talks with other parties over the others.

Saad Hammad, Chief Executive, said: "Through this agreement with RCA, Flybe will operate routes that will provide enhanced regional connectivity to the south-west and East Anglia, in much the same way as we have already offered to the communities of south Wales."  www.flybe.com