It was an occasion when the Seekers’ 1965 hit The Carnival is Over could appropriately have been played again. On 30 September, just two weeks ago, British Airways operated a scheduled passenger service using a Boeing 737 for the last time, flying from Gatwick to and from Turin. Aviation enthusiast and self-confessed ‘eccentric globetrotter’ Michael Bartlett reports. 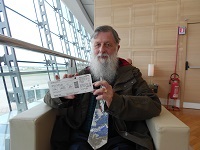 The final flight, BA 2579, touched down at Gatwick at 17:25 local time and for BA’s B737s, the carnival definitely was over. No songs, but the applause from passengers indicated there was plenty of emotion from the aviation fans aboard.

I had not realised as I boarded at Turin what a strong following exists for both BA and the B737. The number of enthusiasts queuing for the flight home was great. Most were  carrying cameras, many a note book and laptop. A few of us had flown in the previous afternoon aboard an Airbus 319.  One or two had come from Stansted on the early-morning Ryanair flight.

We were welcomed aboard by Captain Christine Scott who announced she had been flying the B737 since the early 1990s and would be retiring from BA along with the type. In a final flourish, fans were invited to visit the flight deck after landing to have a chat with the crew and to take photographs.

For the passengers aboard, Turin to Gatwick on 30 September certainly lived up to BA’s slogan, ‘The world’s favourite airline’.  www.ba.com