Forget about 15 hours non-stop in a Rolls-Royce powered Boeing 777, much of it over water.  Sixty years ago a Gloster Meteor, also a Derby engined twin, would be rushing for home soon after 90 minutes in the air.

If you are into elderly jets (and other distinctive aircraft of a bygone era) make a note of Saturday 4 July when Coventry Airport opens up for the Baginton Air Pageant, Baginton the original title of the aerodrome.  (See BTN 8 June)

Built by Gloster Aircraft at Hucklecote, Gloucestershire in 1949 as a two-seat trainer, WA591 (G-BWMF) was delivered to the Royal Air Force on 2 September that year.  Its military career ended in July 1963 after what was described as a ‘flying incident’ finishing up as a gate guardian at RAF Woodvale.  In 1995 it was rescued by a group of enthusiasts and a restoration programme instigated taking 20 years.  It first flew (again) on 11 July 2011.

Also expected to fly is an example of the very pretty de Havilland Venom, distinctive with its twin boom layout. It was a development of the DH Vampire, the RAF’s second jet aircraft after the Meteor, in 1948 the first turbine aircraft across the Atlantic. The first passenger aircraft was a Vickers Viscount on a demonstration tour.   www.classicairforce.com 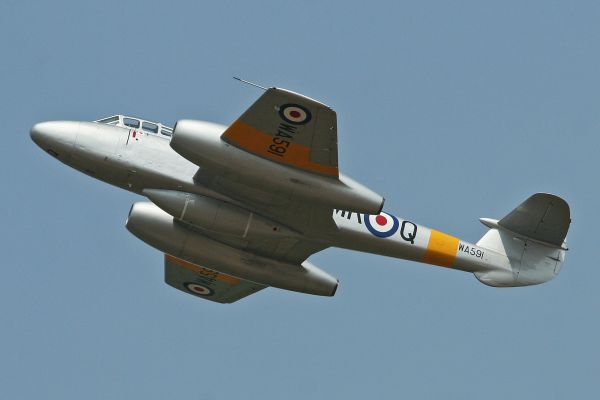