The Portuguese government has received offers for flag carrier TAP from the two bidding consortia, which each involve Brazil-based aviation tycoons. 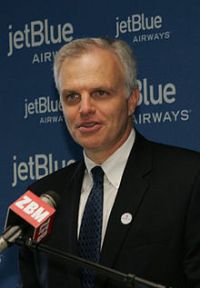 "The privatisation process remains competitive... We have two improved offers, which is a good sign in principle," Transport Secretary Sergio Monteiro has told reporters.

He declined to comment on the offers, adding that the state property holding company Parpublica now had five days to analyse them before the government decides which, if any, is acceptable.

One consortium is led by Brazilian-Colombian investor Germán Efromovich, who controls Latin America's Avianca via his holding company Synergy.

He made the only bid for TAP in a failed sell-off attempt in 2012.  His offer was rejected then because of a problem with financial guarantees.

The rival consortium is a holding company including American-Brazilian investor David Neeleman and Portuguese bus company owner Humberto Pedrosa.   Neeleman is the Chief Executive of Azul Brazilian Airlines and founder of US airline JetBlue.

The government has said that it wants to sell the 61% stake in TAP by the end of June.   www.flytap.com