WestJet, a Canadian airline based in Calgary, has arrived in the UK for the first time.

Founded in 1996, it is the second-largest Canadian air carrier, and flew more than 18m passengers last year.

On Saturday 30 May the airline introduced a daily non-stop service from Glasgow International to Halifax, Nova Scotia, using a Boeing 737-700 featuring Economy Plus.  Flight time is about five hours. It is only its second transatlantic service following the launch in 2014 of direct flights to Dublin.
A host of dignitaries including the Premier of Nova Scotia, the Canadian High Commissioner to the UK and the Mayor of Halifax were on-hand at Glasgow Airport to wave off the inaugural flight.

The busy Atlantic seaport of Halifax is the capital of the Canadian province of Nova Scotia which has strong historic and cultural links with Scotland.  Passengers will be able to access connections to Calgary, Edmonton, Montreal, Ottawa, Vancouver, Winnipeg, and 16 other cities in WestJet’s Canadian network. www.westjet.com 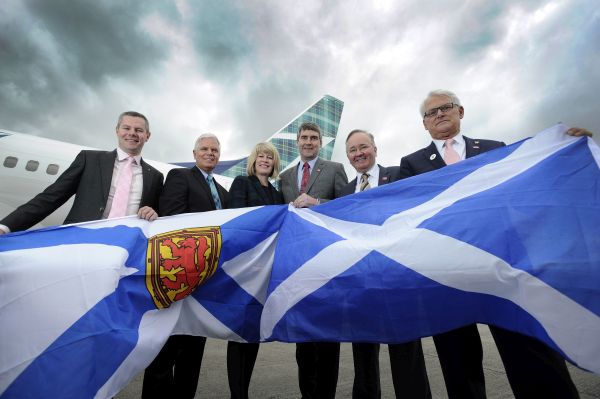