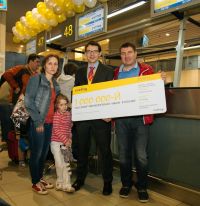 Mr Andrey Smolenkov was the lucky man outbound on a flight to Barcelona.  To celebrate the milestone, the airline representatives greeted the winner at the check-in area decorated with balloons.  A giant boarding pass and a flight voucher for two persons were presented to the passenger.

“We are delighted to celebrate in Moscow this milestone of our history.  Vueling came to Russian market in 2009 with routes from Barcelona to Moscow (Domodedovo).  Six years later, our route network increased to 12 destinations from seven airports in Russia.  We are proud to offer an optimal quality-price ratio together with Moscow Domodedovo Airport, allowing our passengers to travel comfortably to Spain from the capital of Russia,” said Jesus Blanco, International Sales Manager of Vueling.