John Holland-Kaye at the Aviation Club

Next Thursday (4 June) will see many in the airline industry gathering at London’s Institute of Directors for an Aviation Club luncheon. 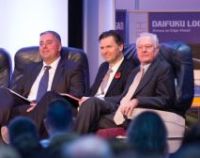 With the report by the Airports Commission now delayed (See BTN 11 May) John Holland-Kaye, Chief Executive of Heathrow Airport Ltd, will put his case forward for the third runway.  It is 12 months since his appointment.  He follows Stewart Wingate of Gatwick, Guest of Honour last month (See BTN 4 May).

Mr Holland-Kaye will present the official Heathrow proposal to the Commission, and no doubt deal with questions regarding noise and emissions.  It projects using land to the south of the M4.  There is an alternative scheme, known as Heathrow Hub, and fronted by former Concorde pilot Jock Lowe, that envisages extending the existing northern runway to the west.

Mayor Boris Johnson, now the MP for Uxbridge and South Ruislip, parallel to the airport, was invited to speak at the Aviation Club, but declined.

Heathrow is probably the largest employer in the area.  A scheme to reactivate RAF Northolt for scheduled services on a short term basis to help the regions with London air connectivity, but with no increased movements, was recently supported by Heathrow.  It is bang in the centre of Mr Johnson’s constituency.  www.aviationclub.org.uk