The case between Belfast International Airport (BIA) and Aer Lingus continued in the High Court last week.  Whether its eventual outcome has any effect on the proposed IAG takeover of the Irish airline remains to be seen.  (See also BTN 27 April) 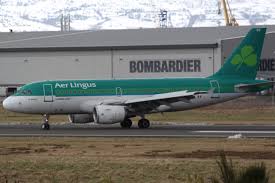 Airline Aer Lingus says that it lost up to £32.2m while operating out of Belfast International according to its new boss Stephen Kavanagh who insisted it only ever entered into a pricing arrangement for flying out of the airport – not a binding contract.

Asked whether Aer Lingus suffered financially from its time at BIA, Mr Kavanagh said it had "lost a significant amount of money in its operation at Belfast Aldergrove."

"In terms of our profit, the negative was €44m," he added.  "In terms of costs which directly applied to the operation of the base, it was €21m."

He explained that the difference between the two figures was partly based on corporate overheads.

Asked about claims that Aer Lingus was under an obligation to stay at the airport for 10 years, he said the airline "saw a pricing proposal, based on an initial three-aircraft base... and that is the basis upon which we operated."