ON TOUR: It’s all about the cabin

Alison Chambers of Emerald Media has been to Hamburg for the annual Aircraft Interiors Expo. www.emeraldmedia.co.uk

A five-class cabin for the Airbus A380 – in First, Business, Premium Economy and two Economy classes (Comfort and Budget); enhancing the passenger experience with mood lighting, innovative light-weight materials in-seat design and the imminent ‘global’ launch of the fastest broadband in the sky were all highlights at the 16th annual Aircraft Interiors Expo (AIX) in Hamburg this month.

This show must be among the most successful for UK event organiser Reed Exhibitions which saw exhibition space increase 8% over 2014 (21,107sq metres) and an expanded in flight entertainment (IFE) zone 31% larger than 2014, spread over three dedicated halls.  Visitor figures have not been published yet, but last year the event attracted over 9,000 visitors and over 800 airline representatives from 150 airlines.  At the Messe Hamburg venue over 530 exhibitors from 30 countries were vying for attention from potential buyers and decision makers. 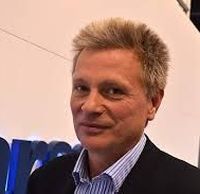 Talk in the busy IFE Zone was all about traditional seat back ‘embedded’ IFE versus inflight connectivity, sparked by comments from Leo Mondale, President of Inmarsat Aviation, who on the eve of the show at the Passenger Experience Conference highlighted that wider use of passengers’ own technology inflight is going to be the main driver in the future development of IFE.

Connectivity has become a prerequisite for many passengers who expect to have internet access when they fly, he stressed.

“We need to give passengers freedom of choice, and that means taking advantage of the hardware that the passenger brings on board.”  Embedded IFEC (versus connectivity via satcom, air to ground or local, in aircraft network) is always going to be two product cycles behind what passengers are already using, he suggested, owing to the stringent regulatory processes aircraft manufacturers and suppliers have to go through.  So, by the time the hardware is switched on, it is already two stages behind in the development cycle.

His comments coincided with the eagerly anticipated launch later this year of the fastest broadband in the skies, globally, the GX Aviation Ka-band broadband service (Global Xpress) where a network of three satellites will provide seamless global coverage across multiple time zones, delivering passengers with continuous and uninterrupted service.  It will expand the possibilities for IFE to real-time TV and TV on demand as well as standard email and web browsing at a much faster speed.


According to a survey undertaken by inflight internet specialist Gogo 83% of airline passengers outside the USA were interested in using inflight wi-fi, compared with 74% of US-based passengers.  Rest of World travellers were also more interested in accessing wireless IFE, despite the fact there are fewer connected aircraft operating in their regions.  Some 20% of those surveyed said they wanted wi-fi when choosing an airline – 4% more than in Gogo’s 2014 study.

The global aircraft seating market is projected to reach US$7.9bn by 2019 with Airbus and Boeing alone having a requirement for over 3.4m seats during the period 2014-2020.  AIX provided a showcase for many new seat offerings, including a new lie flat Business Class seat from Geven, the Italian interiors specialist which has its sights firmly set on winning some legacy airline customers, buoyed by its accreditation in the Airbus catalogue.  It took an impressive double decker stand over 3,000sqm at AIX and used its whole portfolio of seats as its meet and greet feature, accompanied by freshly brewed espresso.  A highlight was an attractive carbon fibre economy seat, artfully curved to give more leg room.

Rockwell Collins was at AIX to demonstrate its suite of cabin solutions with its focus on the single aisle market.  “Today passengers are regularly flying six and a half hours on single aisle aircraft, sometimes in high density seating and they want to be entertained,” said Craig Elliott, VP Air Transport Cabin Solutions Sales and Marketing.  Rockwell Collins’ offering includes its PAVES On-demand seat centric IFE featuring a touchscreen interface that provides overhead broadcast video and in-seat audio / video, as well as a new wireless IFE solution which has the ability to stream video content to over 250 passengers simultaneously.  Rockwell Collins was also proud to scoop Airbus’ 2014 award as best Inflight Entertainment Provider, reflecting in-service satisfaction from over 118 Airbus customers, representing 77% operators worldwide flying 90% of the worldwide fleet.

UK seat manufacturer Flying Service debuted a new revenue generating seat known as the ESP, a project it has embarked on in collaboration with specialist interior company Chameleon Products.  ESP enables a normal economy seat to convert into a generous lounger seat at 29 inch seat pitch within 25 seconds.  It can be quickly changed in under 30 seconds apparently, by obtaining a key from the flight attendant and seems ideal for placating small children on a long haul flight.  The seat on show featured a cloth fabric using Sir Paul Smith design, although wipable leather may be more user friendly for young children, airline observers suggested.

Zodiac Aerospace featured a new cabin surveillance system which uses a camera to adjust the changing lighting levels on board an aircraft while SG Aerospace was promoting retrofit lighting from older fluorescent systems to enhance the cabin.

As noted in last week’s BTN (BA upgrades some 747s www.btnews.co.uk/article/8706) Airline Services Ltd of Manchester took advantage of the show to launch its new interiors business and a significant contract win from British Airways to integrate a new IFE system on 18 Boeing 747 aircraft.  It will be responsible for the design, certification and manufacture of the modification kits to integrate the new IFE system on all classes of passenger seating from World Traveller (Economy) though to First Class.   It will also integrate new universal power sockets at every seat in World Traveller Plus (Premium Economy) together with individual USB sockets to allow customers to power their phones and tablets.

In the Crystal Cabin Awards (the Oscars for the aircraft interiors sector) there was victory for Etihad Airways in the Premium Class and VIP category for the airlines Residence First Class cabin (Editor’s note – I’ve sat in it on an A380 in Abu Dhabi – an inflight report is unlikely - bookings we are told are very good (See BTN 5 January www.btnews.co.uk/article/8282).  For its potential contribution to greener, lighter aircraft BE Aerospace won an award for a solar-powered window shade that provides passengers with electricity to power personal devices during flight while Embraer was lauded for innovative design elements on the new E2 regional jet family.

“Some 3.2 billion passengers used air transport for business and leisure in 2014 and IFE has an ever growing important role to enhance the passenger experience.  This has been reflected in Aircraft Interiors Expo 2015 being the largest edition ever staged, covering all aspects of the interiors spectrum on the show floor,” said Katie Murphy, Reed Exhibitions’ Senior Event Director of Aircraft Interiors Expo, reflecting on the most successful gathering ever.
www.aircraftinteriorsexpo.com

This is an additional image which actually moves.  Clearly something for the future.  From Flying Service.