Following the announcement of its non-stop route from Auckland to Buenos Aires (see BTN 26 March) Air New Zealand is to fly direct to Houston, Texas, from December this year, making a direct connection between New Zealand and America’s South for the first time. 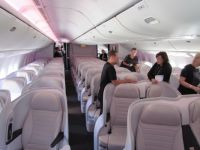 Air New Zealand will operate a completely refitted Boeing 777-200 aircraft up to five times a week opening up the state of Texas as well as popular nearby tourist states such as Louisiana and Florida.

With connections the new route is set to become the fastest way for Kiwis to get to established destinations, including New York and Chicago.  The announcement means Air New Zealand will soon be offering direct services to five North American destinations – Los Angeles, San Francisco, Vancouver, Hawaii and Houston.

Air New Zealand will code share from Houston to other key USA domestic destinations as well as Mexico, Central America and the Caribbean with Star Alliance partner United Airlines, which has a large Houston-based hub.  www.airnewzealand.co.uk