It seems that London City Airport is not the only downtown operation caught up in the mire of politics.  Toronto City’s (Billy Bishop Airport) planned expansion is facing opposition from an airline.  This is Air Canada, is now very much the junior carrier at the airport, but actually an established operator when Porter Airlines, currently the prime mover, arrived in 2005.  (See BTN 30 March) 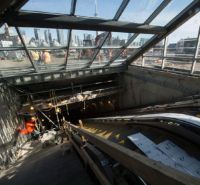 "We do not support jets at Billy Bishop – we prefer to see a growing downtown airport focused on short haul passengers using modern turboprop aircraft, which would be more consistent with the spirit and intent of the original tripartite agreement at Billy Bishop,” said Derek Vanstone, Air Canada's Vice President of Corporate Strategy, Government and Industry Affairs.

The debate has been heated since Porter announced two years ago it wanted to fly Bombardier’s new CSeries jets out of the island airport to offer larger aircraft and expand routes.  The change would require lifting a current ban on jets and lengthening the runway and it would certainly challenge some Air Canada routes out of Toronto International.

Locally some support the idea, an expansion which would allow for destination development while others fear the noise and traffic would be intolerable.  Bombardier has a large plant in Toronto which assembles the Q400.  www.portstoronto.com/airport.aspx