The Mayor of London, Boris Johnson, has turned down planning approval for a development of London City Airport, which has already been agreed by the local council.  This dramatic move calls into question his candidature for the Heathrow constituency of Uxbridge and Hillingdon, reliant on the airport as a major work source. 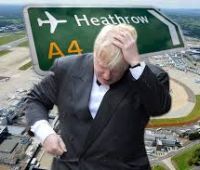 He has instructed Newham Council to refuse the application on noise grounds.  The airport sought permission to create more parking spaces and build an extra taxiway for new, even quieter aircraft.

However, a spokesman for the Mayor said that he was unwilling to expose East London to an increase in noise on the basis it would be unacceptable for West London if Heathrow Airport were expanded.

The Mayor believed that the "only long-term option" to balance the airport capacity issue with residents' quality of life, was to build a new hub to the east of the city, he added. An industry expert said that although Boris' scheme for a brand new Estuary airport had been turned down on a host of grounds by the Airport Commission, he seems intent to promote this lost cause by trying to scupper the successful London City Airport and its limited expansion plans.  "Will he try to now sabotage Heathrow,?" he said.

London City is considering the substance of the Mayor’s personal directive and will make a decision on its response strategy in due course.    www.londoncityairport.com

And this pathetic spiteful individual has designs on being Prime Minister.I know who I'm not going to be voting for.

There's no question of Heathrow being 'sabotaged' - typical hyperbole from the pro-LHR expansion lobby. Boris Island won't be built, but neither should Heathrow be expanded. 'Better - not Bigger'.