Having aborted previous plans to offer wi-fi Ryanair plans to trial in-flight entertainment and possibly wi-fi on some flights this year in its latest attempt to attract business flyers and families who were turned off in the past by its basic service. 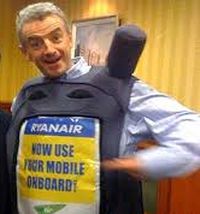 Since an unquotable pledge by Michael O'Leary, Chief Executive, to improve the quality of the product, Ryanair has reduced penalty charges, overhauled its web site, tripled its marketing budget and launched business fares.

John Hurley, Chief Technology Officer, told the Irish media last week that the present thinking was not to charge for the basic service.  For an airline with a reputation for grabbing every penny this would be a breakthrough, but has Mr Hurley spoken to Mr O’Leary?  Advertisers would pay for the service.
.
Wi-fi will likely be trialled later this year on certain routes popular with business travellers, a key focus for the airline which in 2014 launched flexible fares aimed at that market.   www.ryanair.com