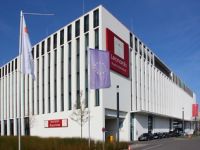 The Leonardo Hotel Munich City Olympiapark (formerly the Best Western Aparthotel) is currently closed and will reopen later in the year offering 195 air-conditioned rooms with a fresh, new design and quality furnishing after extensive renovations.  A bistro, a breakfast restaurant and a 24/7 grab'n'go station will be available.

The Leonardo Hotel Munich City North Hotel (formerly Hotel Mayerhof) is now open and has 70 air-conditioned and comfortably furnished rooms, some with balconies, and a breakfast restaurant.  A conference room with space for up to 30 people is available for smaller business meetings.  Renovation work is planned in the spring.