ON TOUR: Santorini – sometimes called Thira – It is a Greek island

There are not many places that offer entry by scheduled air services, cable car, or by donkey.  And cruise ship or ferry.

Santorini you will not find in OAG or airline schedules but it does have an airport called Thira (JTR) which also features in this issue of Business Travel News,  British Airways  offering services this summer from London City Airport.  Other established non-stop ex-UK summer operators include easyJet, Thomson and Thomas Cook Airlines.  Just to get it in perspective it is 200 miles south east of Piraeus (Athens) in the Aegean Sea covering just 28 square miles. 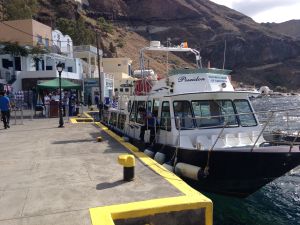 Santorini is an archipelago, the site of one of the largest volcanic eruptions in recorded history, the Minoan eruption, which occurred some 3,600 years ago at the height of the civilization of that name.  It was a truly ‘big bang’.  Only the main island is inhabited, about 14 miles long and 8 miles wide at the most.  The eruption of the submarine volcano Kolúmbo, located 6.5km NE of Santorini, on 27 September 1650, was actually the largest recorded in Eastern Mediterranean during the past millennium!

In 1956 there was another earthquake, the old Archaeological Museum destroyed, replaced by a modern building in the Greek style well laid out and giving a glimpse of one of the world’s most ancient civilisations.  Some of the displays are remarkable and revealing advance cultivation with plaster casts of furniture, stunning wall paintings, household equipment, bronze vessels, tools and weapons.

Our arrival was by liner, Oceania’s lovely Riviera.  The boatmen of Santorini are smart.  Instead of the ship’s tenders (fine but designed as emergency craft) the island offers the shore transfer.  Much more comfortable and an opportunity to sit out topside and take in the spectacular view of the capital Fira, sitting 700ft above sea level on the top of a huge escarpment.

We landed at what is termed “The port of Skala”, no more than a wharf with a few essential shops.  The choice is the cable car, donkey, 700 steps, grab a taxi, or join a tour.  We took the tour and came back via the cable car, just a two-minute ride but a glorious view.

Santorini has no rivers, and water is scarce.  Until the early 1990s locals filled water cisterns from the rain that fell on roofs and courts, from small springs, and with imported assistance from other areas of Greece.  In recent years a desalination plant has provided running water to most houses.

The population of Santorini numbers some 11,400 yet every year 500,000 tourists visit the island.

The island remains the home of a small, but flourishing, wine industry, based on an indigenous grape variety producing a fine dessert wine which we were able to sample at a vineyard high up in the middle of the island with breath-taking views whitewashed houses and blue-domed churches.  The white wines offered were extremely dry.  It is not easy to be a winegrower in Santorini; the hot and dry conditions give the soil a very low productivity.  The yield per acre is only 10 to 20% of that common in France or California.

Santorini tomatoes are renowned; they are cherry tomatoes that are extremely tasty and sweet, and with an intensely red, staining colour.

Our next stop was the village of Oia with cobblestone streets filled with quaint shops and cafés and beautiful mansions clinging to the cliffs above.  Fira itself sits on the top of the caldera and is full of shops, restaurants and small hotels, plus being Greek seemingly numerous churches.

A short day visit on a cruise is always something of a taster.  There is no chance of seeing the hotels (including 5-star boutique) and other accommodation but you do get a feel for the place.  Santorini has won numerous awards.  It was not where Mama Mia was filmed (that was Skopelos, further north and much the same size) but you get the same atmosphere.

Santorini is one to go back to.  Next time it is by plane and a more relaxing experience.   www.santorini.net 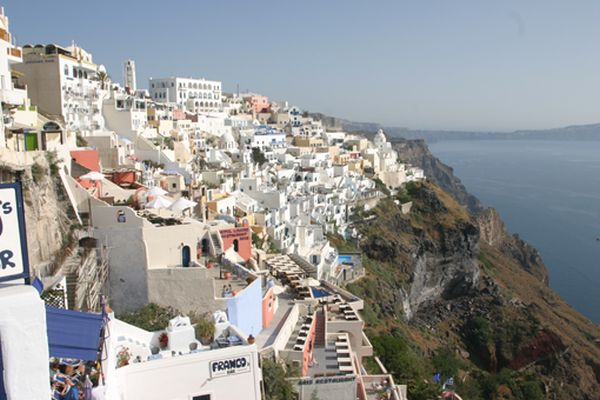