Oceania Riviera visited some notable places during our Eastern Mediterranean water borne tour (see  CRUISE NEWS  in this issue).  Undoubtedly the most interesting port of call was Kusadasi, now the centre of a Turkish resort area and in itself a bustling little town with its Grand Bazaar and local eating places.  We docked right in the centre, with no fuss customs and port authorities.  Kusadasi extends a warm welcome.  No wonder it is popular with cruise ships. 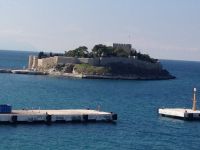 If you are holidaymaking in the area Izmir International Airport (ADB) is 80kms from Kusadasi and Bodrum Airport (BJV) 130kms away.  This is the area of Turkey that borders the Aegean Sea and there is a whole host of resorts offering some of the cheapest package tours out of the UK, very good value and often all inclusive.

Kusadasi is at the centre of numerous Greek and Roman historical sites including Didyama (Temple of Apollo), the ancient port of Miletos and Metropolis, an important city in its time, today a ruin, famous with its name now attached to rather larger enterprises.

We chose for our day trip Ephesus just 10 miles from Kusadasi and one of the world’s great archaeological sites of the Greek/Roman era.  In historical times it was a major port but the sea access has long silted up leaving for a very flat approach.  And guess what?  An airstrip!  The paved runway is 1,800m long (ICAO LTFB).

Ephesus is a living museum of an era at least 2,000 years old with excavations always on-going and sympathetic reconstruction taking place under the strict auspices of the Turkish Historical Association and backed by the Chair of Classical Archaeology at the University of Vienna.  Every season a team of scientists from all over the world, primarily from Austria, Germany and Turkey, come and work at Ephesus.  As only a small part of the city’s area (about 10-15%) has been explored, scientific research will continue for many years.  What you can see already uncovered is still immense.

From c.100 BC to AD 100 Ephesus was the world capital of the slave trade.  Residents included St John and St Paul and the Virgin Mary was said to have died in the city.  It was very prosperous, clearly obvious from the magnificent mosaic remains on view.

According to estimates Ephesus had a population of 33,600 to 56,000 people in the Roman period, making it the third largest city of Roman Asia Minor after Sardis and Alexandria Troas.

The Roman Theatre holds up to 24,000 people and has been the home for many concerts over the years including Pavarotti, Sting, Elton John and Julio Iglesias.

Starting from the top you walk down Curetes Street, the main thoroughfare of the city.  In Roman times it led to the port.  You have to imagine what it must have been like 2,000 years ago but even today it is an impressive highway with a variety of buildings on both sides. 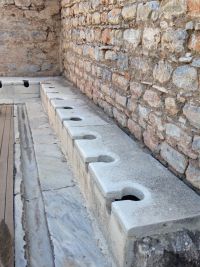 A viaduct fed the town with water. Fountains were an essential part of the life helping to keep the place cool during the summer.  We visit a public loo as well.

Impressive is the temple dedicated to the Emperor Hadrian, who came to visit the city from Athens in 128 AD.  The facade of the temple has four Corinthian columns supporting a curved arch, in the middle of which contains a relief of Tyche, Goddess of Victory.  The side columns are square.  The pedestal with inscriptions in front of the temple, are the bases for the statues of the Emperors between 293-305 CE, Diocletian, Maximian, Constantius I, and Galerius.  The actual statues have not been found yet.

Now under cover (and not part of the standard entrance fee, but a must) the Ephesus terraced  houses are located on a hill, opposite the temple to Hadrian.  Once inside it is a steep climb through six Roman villas, each one larger and clearly more sumptuous than the one below.  Just as with many civilisations the higher you were the more prosperous you were. 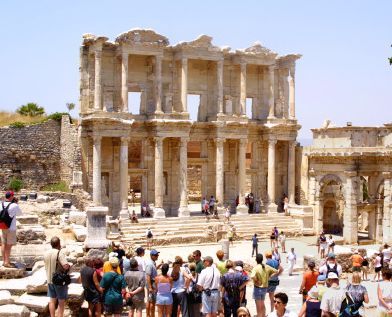 The Celus library is one of the most beautiful structures in Ephesus. It was built in 117 AD and was the monumental tomb for Gaius Julius Celsus Polemaeanus, the Governor of the Province of Asia; from his son Galius Julius Aquila.  The scrolls of the manuscripts were kept in cupboards in niches in the walls.  There were double walls behind the bookcases to prevent them from the extremes of temperature and humidity.  The capacity of the library was more than 12,000 scrolls.  It was the third richest library in ancient times after the Alexandra and Pergamon.

In Ephesus gymnasiums were the schools for young people in which one could take lessons for art, sports, literature, drama and speech.  The most important and beautiful of these gymnasiums was the Gymnasium of Vedius.  The entrance of the gymnasium is on the east, and when entering there is a palaestra (courtyard), surrounded by columns.  The Hall of Emperors is also on the east, with statues and floors covered with mosaics.

Overlooking the whole site is the Crusader castle of Ayasuluk, 1,000 years old but the site dating back much further.  We unfortunately did not have the time to visit.  From a distance it is certainly impressive.  www.ephesus.us  www.kusadasi.com